Orlando Weekly
Naked Boys Singing is a boozy, bawdy evening of ogling buff boys with their balls swinging in the breeze
By Seth Kubersky
Feb 12, 2016 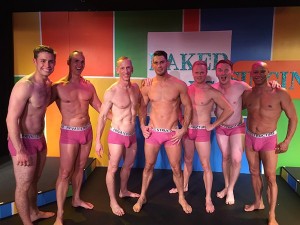 We live in a world of lies, bombarded daily by half-truths, obfuscations and outright falsehoods from promoters and politicians. So let’s get erect and give a standing ovation to Naked Boys Singing for earning the “truth in advertising” award. This spirited musical revue may not have any dialogue, characters or plot, but it’s got more exposed penises than a half-dozen productions of Equus. Which just goes to show how far our city has evolved: Back in 2000, a lone Naked Guy at the Orlando Fringe faced threats of arrest, but in 2016 seven nude dudes can strut on the Footlight stage for five weekends and no one blinks an eye.

A long-running hit in New York, NBS comes to Orlando courtesy of producer-director Tim Evanicki, who recently took the reins of the Parliament House’s Footlight Theatre. Under former artistic directors Michael Wanzie and David Lee, Footlight hosted not only PH’s popular drag shows, but legit dramas and comedies that drew audiences of every orientation. That leaves Evanicki some big shoes to fill in his new role, as he graciously acknowledged at the packed press preview.

“I am loving this job,” Evanicki told me in an interview after opening night. “Parliament House is an LGBT resort that caters to everyone. I’d like the programming in the theater to reflect that. We will be bringing in more book musicals and big names that appeal to all walks of life.”

Evanicki first saw Naked Boys Singing at NYC’s Actors Playhouse in 2004 and made it his top priority upon becoming PH’s new artistic director. “I wanted to make sure we kicked it off with something that would put the Footlight Theatre on the map,” he said. “I also wanted to pick a show that would cater to and attract more than just the LGBT community.” Of course, assembling a show where the cast is unclothed nearly the entire time required some adjustments. “Singing auditions were fully clothed, but the dance callback was done nude,” Evanicki recalled. “It was funny, because we have union performers, and the union required us to have a monitor from Actors’ Equity audit the audition process. Poor Doug Truelsen.” The early rehearsals were done dressed, but drawers were dropped once Pete Simpson’s choreography – which puts a floppy twist on the classic chorus kickline – was complete. “I left it up to the boys as to when they felt comfortable rehearsing nude,” said Evanicki. “We had 12 total rehearsals, and they were nude on day seven.”

It’s one thing to hoot and holler at a stage of stripped strangers, but I found the show a tad awkward to watch (at least at first) because I know some of the cast. For example, I’ve been friends with Joshua Roth since we worked on Tod Kimbro’s 2011 Fringe musical Suckers, but I’ve never seen him as exposed as during his “Perky Little Porn Star” number. “There is nothing that truly prepares you for 90 minutes of nudity; you kind of just have to jump into the deep end headfirst and with a smile on your face,” Roth told me. A theme-park performer by day, Roth’s NBS role has let him “step way out of my comfort zone, as well as become more comfortable with myself, my peers and also complete strangers.” Of course, you can’t do a nude musical without some unintended side effects: “I have been working a lot with aerial silks lately, and I have a pretty bad bruise on my upper left thigh … pretty much my groin area. I pulled Pete (our choreographer) into the dressing room, and without even thinking about it pulled down my pants and showed him the bruise. It wasn’t even until about five minutes after he left the dressing room that he realized that I had just whipped it all out for him and he didn’t even notice or care … and neither did I.”

So after all that, how is the show? As I said above, if you are interested in story or deep meaning, better move along: There’s a nod to nakedness as a metaphor for emotional vulnerability and a maudlin song about a dead lover, but otherwise the mood is kept light and campy. The performers are all solid (ahem), especially Kevin Kelly, who wears Liza well in the Fosse-flavored “Entertainer,” but the majority of the music is simply unmemorable. With a baker’s dozen of credited writers (including Bruce Vilanch), it’s a clear case of too many cooks muddling the man-chowder, and musical director John T. Gardner’s keyboard often drowned out the unamplified singers. As a hetero male, I didn’t identify with some of the topics (like gym addiction), though it appears sung schlong synonyms make everyone’s inner 12-year-old snicker, gay or straight. But if a boozy, bawdy evening of ogling buff boys with their balls swinging in the breeze sounds like ideal entertainment, better buy your seats now; Naked Boys Singing looks to be the hardest ticket of this theater season.