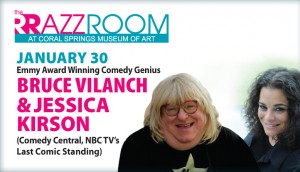 From Mr. Vilanch: “Currently celebrating his seventeenth year as Lindsay Lohan’s sobriety coach, Bruce Vilanch is descending to The RRazz Room to dispatch more updates on his bizarre career behind, before and squatting over the footlights. A Hairspray star, a Hollywood Square and the latest success story on Christian Mingle, (who just hooked him up with a guy who used to be Pope), Bruce has more than a few songs to sing and stories to tell.”

Jessica Kirson’s unique style and captivating stage presence captures the attention of audiences and club bookers everywhere she performs. Her wide variety of characters brings a diverse energy to her routine. Once you’ve seen her amazing talent, it’s easy to understand why she was selected to perform at the Hamptons, Toyota, Marshall’s Women in Comedy, Comedy Central’s South Beach, Montreal, and HBO’s Las Vegas comedy festivals. She was awarded “Best Female Comic” by the MAC association in New York City and recently accepted the Nightlife Award for “Best Stand-up Comedian” in New York City. Her YouTube channel “The Jessy K Show” has more than 100 videos with a combined total of over 2.5 million views. She recently launched her own podcast called “The Jessica Kirson Podcast.”