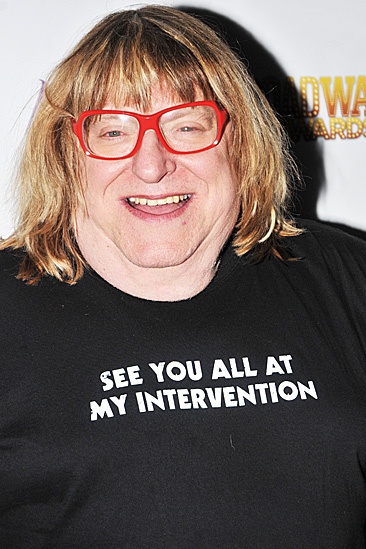 You canâ€™t help but notice him when he walks into a room wearing his trademark t-shirt with an emblazoned slogan. You canâ€™t help but laugh at his jokes and stories. Those are givens when it comes to award-winning comic writer Bruce Vilanch (the Oscars, Donny and Marie Show, Hollywood Squares).

But how many times does do the titles â€™musical theater performerâ€™ or â€™songwriterâ€™ come to your mind when you think of him?

As it turns out, they should since Vilanch both starred in musicals and written songs. Bruce Vilanch was in the first national company of the Tony-winning musical “Hairspray,” and has written songs for Eartha Kitt and the Village People.

Always poised to take command of an awards show or benefit with his wit on the microphone, Vilanch, however, will call upon his song and dance skills at the upcoming benefit event One Night Cabaret Benefit in San Francisco for the Richmond/Ermet AIDS Foundation which is far more commonplace for the funny man than we might imagine.
Making it happen

BeBe Sweetbriar: I think it is wonderful that the One Night Only Cabaret benefiting Richmond/Ermet AIDS Foundation at which you are set to appear on July 2 in San Francisco with the cast of Green Dayâ€™s â€™American Idiotâ€™ will give many in audience their first chance to see you in a musical-type forum. Many of us have not had the privilege of seeing you in the touring company of â€™Hairsprayâ€™ as Edna Turnblad, and think will be surprised to see your performance at this event. 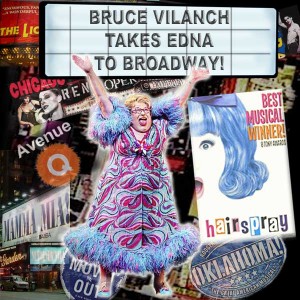 Bruce Vilanch: Nobodyâ€™s going to be more surprised than I am (laughs). Iâ€™m going to be on the road until I get to San Francisco the day before the show, so me and the cast of â€™American Idiotâ€™ will be working on something when I arrive. If not, youâ€™re going to get me to host the thing and I will see what little musically I can come up with (alone).

Iâ€™ve done this a bunch of time. When there is a big musical in town, Richmond/Ermet gets with the cast of the show on their night off and turn it into a benefit. Iâ€™ve done it with â€™Young Frankenstein ,â€™ â€™Hairâ€™ and now â€™American Idiot .â€™ The thing about â€™American Idiotâ€™ is that it is all Green Day music, so these guys (and gals) are doing Green Day eight times a week (Tuesday-Sunday with 4 shows on weekends). They are probably going to use this opportunity to sing Puccini and Britney Spearâ€™s â€™Toxic .â€™… all the musical literature they would like to expose to a San Francisco audience. In that vein I will try and come up with something to match what they are up to. Iâ€™ve seen this company of â€™American Idiotâ€™ when they played Los Angeles, and they are incredible — extraordinarily talented.
â€™Benefits â€™R Usâ€™

BeBe Sweetbriar: Itâ€™s fair to say that you will be in good company…

Bruce Vilanch: Very good company, because a lot of them were actually in â€™Hair.â€™ They went from â€™Hairâ€™ to â€™American Idiotâ€™ because they are both rock musicals, and they require similar skill sets. When I was in â€™Hairsprayâ€™ we did the same thing (benefits). We did a lot of Monday nights all over the country.

BeBe Sweetbriar: You know, many times when I speak to actors doing some real serious Shakespearean-type theater, they use working in comedy as kind of a release to get out of that serious vein. Is this musical-type performing like that for you — a release or break from the comedic writing that you do all the time?

Bruce Vilanch: Yeah! Iâ€™m just â€™Benefits â€™R Usâ€™! That should be my corporate logo. Iâ€™ve done so many of these over the years. Iâ€™m beginning to wonder what am I breaking away from… other benefits?

The fundraising needs to be done, but I guess it is an opportunity for me to get to exercise the performance muscle as opposed to the writing muscle. It is out of the ordinary because it is not what I generally do.

BeBe Sweetbriar: Because you present yourself to us, the public, the audience, as sort of â€™one-of-us,â€™ I think we sometimes forget about the Hollywood insider that you are. I mean your skills that you utilize to do the writing for all four of the major entertainment award shows (Academy Awards, Tonys, Emmys, Grammys), so many variety shows, and concert shows (Diana Ross, Bette Midler, Michael Feinstein) has established you in high regard in the Hollywood circle. We forget about this because you are so approachable and down to earth. 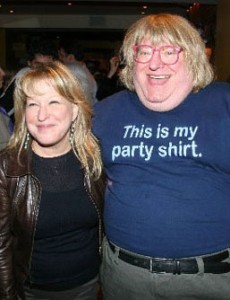 Bruce Vilanch: Well, Oh! Iâ€™m common, what can I tell ya? Extraordinary… but common.

BeBe Sweetbriar: To even think that we can put â€™songwriterâ€™ in front of your name when introducing you…

Bruce Vilanch: (interjecting) Funny, I did have a hit disco song. I had a disco career 30 years ago. I wrote a song for Eartha Kitt called â€™Where Is My Man?â€™

Bruce Vilanch: And then the guy I collaborated with which was Jacques Morali, who created the Village People (â€™Y.M.C.A. ,â€™ â€™Macho Man ,â€™ â€™In The Navy ,â€™ â€™Go Westâ€™). So, I did an album for the Village People, which is called â€™Sex Over The Phone.â€™ It was banned by the BBC (laughs).

I got to work with the Village People and Eartha Kitt in the second and third acts of their careers, respectively. This was after their HUGE hits. I didnâ€™t have those. Only God knows what I would have done with all that money! That has been the extent of my songwriting career, up to now, except for a lot of parodies.

BeBe Sweetbriar: Like San Franciscoâ€™s own Tom Orr. He writes a lot of parodies for himself and other local celebrities to perform.

BeBe Sweetbriar: Another thing we forget is the numerous awards you have received for your charitable work for the Â fight against AIDS and the gay rights movement.

Bruce Vilanch: I have a Lucite shelf! I have many items of varying shapes and sizes in crystal and Lucite, and itâ€™s all waiting for an earthquake.

BeBe Sweetbriar: Iâ€™m really kind of scared to ask to describe the shapes of every one of those items you have on the shelf (laughs).

Bruce Vilanch: Oh, my God! Well, thereâ€™s a shaft Iâ€™m looking at. Quite a few shafts, as a matter of fact. Itâ€™s very nice, very encouraging. When you are sitting in the middle of the night by yourself and thinking this is crap that Iâ€™m writing, itâ€™s never going to play, and then I look up at the shelf and go â€™well, something worked.â€™

BeBe Sweetbriar: Well, there was the one-man show you wrote and performed, â€™Almost Famous,â€™ sometime ago… 12 or 13 years ago. Is there any chance we may see that in a reprise with a rebirth?

Bruce Vilanch: Well, Iâ€™ve been doing a one-man show steadily since, itâ€™s just, the stories keep changing as new things happen. Itâ€™s essentially the same idea. I have no act, Iâ€™m just talking about the things Iâ€™ve done for other people, and things Iâ€™ve been involved in. So, itâ€™s not exactly the same show, and I donâ€™t do those songs any more. Iâ€™m actually working on a â€™wholesaleâ€™ new one. Iâ€™m going around the country doing pieces of it here and pieces of it there, and sooner or later it will coalesce into something. Then Iâ€™ll bring it back and try and sell some tickets.

BeBe Sweetbriar: Itâ€™s funny also, because I see you at so many awards shows that you host or present, and you have so many great one-liners and wonderful anecdotal stories that you tell that are hilarious, and yet, when we see descriptions of who you are and what you do, we never see something like stand up comic in there. 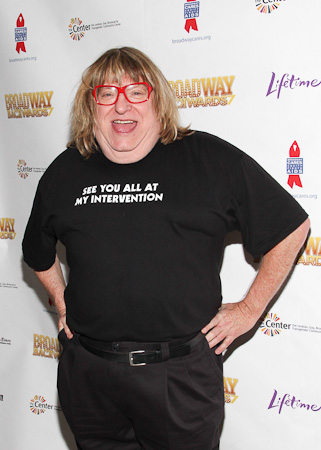 The ritual is different. Thatâ€™s why Iâ€™d much rather play in a theater than in a club. (Itâ€™s) just not my scene. I also donâ€™t say Iâ€™m a stand-up because it means a certain type of performance which I donâ€™t think I do. I have elements of it, but I call myself a â€™sit-downâ€™ comic (both laugh), because I tell stories a lot and you have to pay attention. There can actually be silences while people are absorbing and being interested, as opposed to a sort of laugh-a-second that club comics get.

BeBe Sweetbriar: Some times that one-second laugh is the only laugh many stand up comics ever get in a short-lived career. Iâ€™d take longevity of laughter in the career of Bruce Vilanch, sit-down or otherwise, any day!

One thought on “The Edge’s BeBe Sweetbriar Interviews Bruce Vilanch”