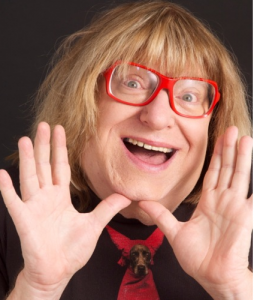 “You get your start in comedy by looking in the mirror and thinking what you see is unusual,” says Bruce Vilanch. “So you start making funny faces and perform for yourself.”

Sixty-six years — and six Emmys — after first catching a glimpse of himself in the mirror, Vilanch is still screwing up his face and cracking wise. His signature heft, charmingly raspy voice, and unstoppable wit marked him for a career in comedy from the get go. It helped that he had a “deep-seated need to express [myself],” Vilanch says. “Also, to be funny.”

More than just a comedian, Vilanch has become a force of nature in Hollywood and is particularly known for co-penning the Academy Awards each year. Now, he’s teamed up with lesbian comedian Judy Gold (a two-time Emmy award winner herself) for Big and Tall: Bruce Vilanch and Judy Gold, playing this weekend at the Alden Theatre. “I’m number one, and she’s number two,” Vilanch quips. The comedians met while Gold was working on Margaret Cho’s sitcom, All-American Girl. “I don’t remember exactly when lightning struck,” Vilanch says, “but we were two big gay Jews, and we’re both very showbizzy, so it was a natural fit.”

But beyond being gay and Jewish, Gold has one more more handicap — at least in Hollywood’s terms — than Vilanch: being a woman. “It was interesting for Judy, because at the beginning she wasn’t out. It was pre-Ellen,” Vilanch says. “And because all women are perceived as romantic figures, the vast unwashed audiences had to think she had a shot at getting a man.”

Big and Tall: Bruce Vilanch and Judy Gold is Saturday, November 7th at 9 p.m. at the Alden Theatre in the McLean Community Center, 1234 Ingleside Ave., McLean, Va. Tickets range from $20 to $72. For more information, visit mcleancenter.org/alden-theatre.