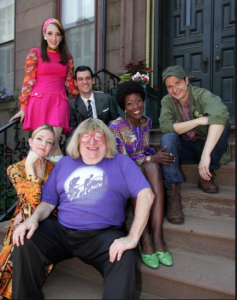 A Sign of the Times, the new pop-fueled musical featuring songs made famous by Petula Clark and other hit-makers of the 1960s, recently wrapped up a successful five-week run at Goodspeed’s Terris Theatre in Chester, Conn. where the show played from July 29 – September 4 to packed houses. News of an upcoming production will be announced.

“Welcoming A Sign of the Times for its first full developmental production, and watching it grow over the course of its run, was a thrill for all of us at Goodspeed Musicals,” said Executive Director Michael Gennaro. “We’re so pleased that the show proved to be one of the most highly rated shows by Goodspeed audiences.”

Creator and producer Richard Robin added, “A Sign of the Times truly found its feet under the guidance and support of the top-notch team at Goodspeed. After a summer of audiences humming the sounds of the 60s and connecting with our show’s heroine as she struggles to find her place in an era of change, we’re now looking forward to what’s next as A Sign of the Times explores options for future productions.”

Below is a sampling of what audiences had to say after attending A Sign of the Times:

– “A Sign of the Times was absolutely wonderful, lifting my heart and spirits. It brought back that youthful uplifting feeling of great hope.”

– “Just loved this play! It brought me back to my middle to late teenage years. The music and singing and dancing was super! I especially liked that it had humor but also took a look at the racial issues and women’s rights that were so front and center during those years. All in all it was just delightful!”

– “I have never had a show leave such an impression on me! I grew up with Petula Clark…”Downtown” was my first 45 record. I can’t get the music out of my head.”

– “My wife and I have been to nearly every show that you have produced at both theaters over the last eight years. This is your best so far!”

– “A Sign of the Times captured the legacy and impact of the cultural changes wrought by the 60s that were expressed through its music. An inspiring array of songs, outstanding script, crisp choreography, great sets and outstanding performances by all. Bravo for a fabulous show!”

This is the story of Cindy, a 20-something whose dreams are bigger than her Midwestern hometown will allow. Set against the backdrop of New York City in the 1960s -women’s liberation, the civil rights movement, and protests of the Vietnam war-Cindy searches for her place in the world. A Sign of the Times, featuring chart-topping hits from the 1960s, celebrates friendship, love, and discovering one’s sense of self. A Sign of the Times was sponsored by Essex Savings Bank.

1965. The pulse of a changing era lures Cindy from Middle America to the swirl of Manhattan. Unexpected friends, lovers, careers, and conflicts are all a subway ride away in a pop-fueled new musical featuring songs made famous by Petula Clark and other hit-makers of the day. “I Know a Place,” “The Shoop Shoop Song,” and “If I Can Dream” are among the fabulous favorites on an eye-opening ride from innocence to experience. Forget all your troubles, forget all your cares – go “Downtown” and find out who you are!

A Sign of the Times includes popular hits by Petula Clark, as well as classics by Elvis Presley, Lesley Gore, Nancy Sinatra, and Fontella Bass. The musical’s original book is by Emmy Award-winning writer Bruce Vilanch. Vilanch’s career as writer and performer spans the worlds of television, film, and stage. For television he has written for shows as diverse as “The Brady Bunch Variety Hour,” “Donnie and Marie,” “Comic Relief,” and “Hollywood Squares,” as well as serving several years as head writer for the Academy Awards. For Broadway, Bruce not only appeared as Edna Turnblad in Hairspray, but wrote the book for the musical Platinum and penned special material for a number of revues and concerts for the likes of Bette Midler, Michael Feinstein, and Diana Ross, among others.

The story of A Sign of the Times was created by Richard Robin. This production made possible by special arrangement with Richard Robin, president of Wells Street Productions.

For 30 years, The Terris Theatre has been Goodspeed’s home for developing fresh, innovative, and original new musicals. These new works have been developed in Chester, Conn., before they’ve moved on to Broadway, Off-Broadway, National Tours, and other Regional Theatres. Because this is a developmental theatre, the show can change on a day-to-day basis. New scenes are added, songs are moved, costumes are changed, dialogue is tweaked?all based on audience response and feedback.

Under the leadership of Executive Director Michael Gennaro, Goodspeed Musicals is dedicated to the preservation, development and advancement of musical theatre. The first regional theatre to receive two Tony Awards (for outstanding achievement), Goodspeed produces three musicals each season at The Goodspeed in East Haddam, Conn. and additional productions at The Terris Theatre in Chester, Conn., which was opened in 1984 for the development of new musicals. Goodspeed also maintains The Scherer Library of Musical Theatre and The Max Showalter Center for Education in Musical Theatre. Goodspeed gratefully acknowledges the support of United Airlines, the official airline of Goodspeed Musicals, and official auto sponsor Hoffman Audi. Goodspeed is supported in part by the Connecticut Department of Economic and Community Development with support from the Connecticut Office of the Arts.