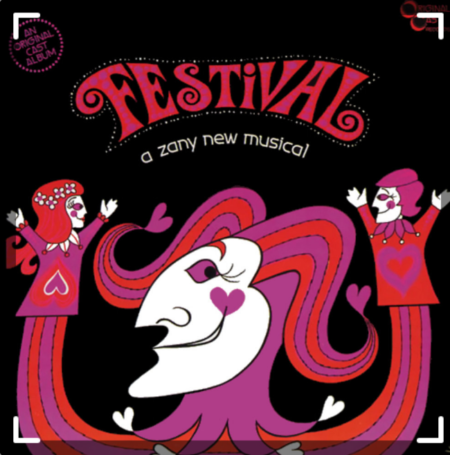 “FESTIVAL,” the new musical at City Center Downstairs, has played Los Angeles,”San Francisco and Washington, and been compared favorably, I understand, to “Godspell,” “The Fantasticks” and “Pippin.” Certainly, it has energy and good humor, and the kind of innocent vulgarity that would not be inimical to a child’s birthday party. In fact, “Festival” would be a smash at child’s birthday party. It is a ceremony for innocents.

The musical is played against the background of a carnival, a happy set, and opens with the pianist, wearing tails, walking across stage and unexpectedly doing a cartwheel. This is harbinger. “Festival” calls itself “zany” musical, and the zaniness —quite often funny, too often only goofy — is what “Festival” is mostly about.

It is also about two lovers, Aucassin and Nicolette, whose story — whose several stories — will be acted out by the members of the carnival. In number, they are nine; in roles they are multiple, and in energy they are inexhaustible. Robin Taylor is perhaps most inexhaustible of all. Miss Taylor has a rubbery face and contortionist’s body, and she is by Gilda Radnerout of Imogene Coca. She mugs, she dances, she sings. Everyone in “Festival” mugs, dances and sings, but Miss Taylor does it more often and more joyfully than anyone else. She is the would?be bride, Aucassin’s warrior, a shepherdess, a pirate, a gypsy and probably a few things I missed. None of these roles needs explanation; they are really inexplicable, anyway.

For “Festival” is a fantasy and a fairy tale, and it is insistent on its zaniness. In general, it is not a good thing when a musical insists on its zaniness; it usually means there will not be much on stage except exuberance. “Festival” has plenty of that, and although it bubbles, it does not often sing. In its good nature, “Festival” begs you to like it; it very nearly sits in your lap and grins. Somehow, however, it is like eating a Chinese meal.

WITH: Michael Rupert, Bill Hutton, Maureen McNamara, Tina Johnson. Michael Magnusen. Lindy Nisbet, Roxann Parker. Leon Stewart. Robin Taylor and John Windsor. strolling player, wandering on and off and explaining what is going on. Mr. Rupert looks like Elliot Gould, although he has considerably more charm, and he can find as many ways to make funny faces as Miss Taylor.

For a while, Mr. Rupert is a small, hunchbacked figure in a cloak— again, there is no point in explaining why —limping and lurching through a comic turn. It is exactly the turn that Marty Feldman did in the movie “Young Frankenstein,” except that Mr. Rupert does not pop his eyes. It is very funny.

Meanwhile, there are the 18 songs by Stephen Downs and Randal Martin. Four or five are better than just good, and one or two are special. The problem is still the zaniness; everything disappears into that.