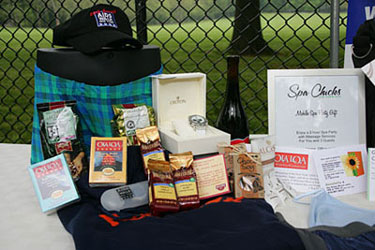 New York, NY (PRWEB) June 2, 2005 — A celebrity gift bag autographed by the celebrities and VIPs at the 20th Annual AIDS Walk New York is currently being auctioned on eBay to support the Gay Men’s Health Crisis (GMHC) and its HIV/AIDS services to men, women and children living with HIV in New York City. This special auction, which is a replica of the $1,800-valued gift bags given to this year”s AIDS Walk New York celebrity participants like Grammy Award-winning recording artist Norah Jones, Queer as Folk’s Hal Sparks and Queer Eye for the Straight Guy’s Jai Rodriguez, Ted Allen and Kyan Douglas, can be purchased through eBay’s Giving Works, at www.ebay.com/aidswalknewyork . The auction will end on Thursday, June 9, 2005, at 9 pm EST.

“We”re delighted to help AIDS Walk New York thank their dedicated supporters at this 20th anniversary celebration,” said Stephanie Jo Klein, founder and president of Klein Creative Communications. “We think that the positive message of AIDS Walk is underscored in the healthy products we selected for these special gifts, which we also hope will raise significant additional funds as part of the eBay auction.”

The 20th Annual AIDS Walk New York was the largest and most successful AIDS Walk ever held, setting records for both participation and fundraising. More than 45,000 participants raised more than $5.8 million for GMHC and other local AIDS organizations. For more information, or to donate, please visit: www.aidswalk.net/newyork .

About GMHC: GMHC is a not-for-profit, volunteer-supported and community-based organization committed to national leadership in the fight against AIDS. Its mission is to reduce the spread of HIV disease, help people with HIV maintain and improve their health and independence, and keep the prevention, treatment and cure of HIV an urgent national and local priority. GMHC provides services and programs to over 15,000 men, women and families that are living with or affected by HIV/AIDS in New York City. For more information about GMHC programs and services, please visit www.gmhc.org .

About AIDS Walk Founder: AIDS Walk New York was founded in 1986 by Craig R. Miller and his organization of activists, MZA Events. Miller is the originator of the AIDS Walk fundraising model and has raised more than $250 million for leading AIDS charities nationwide. Miller and MZA have produced this landmark event every spring for the past twenty years.