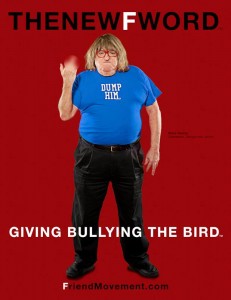 Why are Bruce Vilanch, LeAnn Rimes, Adam Lambert, Tim Gunn, Cloris Leachman and a host of other celebrities flipping the bird?

As the branding image behind the anti-bullying campaign Friend Movement, the photos show celebrities holding their blurred out middle finger up to the camera in an effort to raise awareness about bullying. Out director/activist Elliot London and openly gay actor/model/activist Ronnie Kroell are the creators behind the controversial campaign that was designed to turn the F-word into the new F-word (“friend’).

“We knew going into this that the middle finger has a lot of negative connotations,” explained Kroell, a Chicago native. “But much of what Friend Movement is trying to do is take a negative and turn it into a positive. It was important for us to make a statement and say that this is not a literal campaign, it is very figurative and it’s about empowerment and it’s about your inner monologue.”

Friend Movement was conceived after Kroell and London were introduced to one another by a mutual friend. Both men thought to combine their independent projects and create one anti-bullying campaign.

“I was working on a film project and Ronnie was working on a campaign project and both our projects really needed a lot of love,” said London who is originally from Australia and got his start as an intern on The Jerry Springer Show. “We decided to figure out how to combine forces and that’s how Friend Movement came along.”

Both Kroell and London were bullied as kids. Kroell was called a ‘faggot’ and had his pants pulled down at school and London was also called a ‘faggot’ and was spit on while riding the bus to Harlem High School in Machesney Park, Illinois. London recently went back to his high school to film a narrative short as part of the campaign. The premise of the film is to capture the stories of kids who have been bullied.

“Each student from the school created the anti-bullying film project and we went in and brought a Hollywood crew and gave it the Hollywood feel,” said London of the project they hope to have finished by late July. “It gives the students self-empowerment, it gets the people involved and it is conversation. This is something that we want to add to what Friend Movement is all about, which is going to high schools across the country and even across the world and bringing them the mentors and the help and bringing a voice to these projects.”

On July 1, Friend Movement held a benefit concert celebrating music and friendship with proceeds going towards their campaign. The concert featured the likes of LeAnn Rimes, The Voice contestants Frenchie Davis and Dia Frampton, Abraham Lin (The Glee Project) and singer Austin Brown, who is Michael Jackson’s nephew. Actress Hana Mae Lee, from the film Pitch Perfect, hosted the show.

Friend Movement has reached out to the fundraising website indiegogo.com to raise money for an upcoming cross-country tour that will get the word out about the campaign in an innovative way. The plan is to shoot 10,000 photos in 90 days across 40 cities.

”Raising our $99,000 goal on indiegogo.com will allow us to go to these 40 cities and take these photos for free for anyone that shows up,” said Kroell. “Not only take their photo but talk to us about their experiences being bullied and why it’s important for them to be a part of the campaign and be a friend.”

London and Kroell work 24/7 to give the campaign worldwide attention. But the success of the project is of no surprise for two guys who had big imaginations and big ambitions growing up.

“Being an only child is really helpful in a way because we never really had the barriers, so for the both of us we just do what we can do,” said London. “We’re not afraid to reach for the stars and push our limits.”

Kroell is quick to point out that Friend Movement reaches out to people from all communities, no matter their sexual orientation.

“I think one of the things that is important about this campaign is that it’s not just an LGBT campaign,” he clarified. “While we’re finding support and strength from our family and friends in the LGBT community, it’s really important to know that bullying doesn’t discriminate. As Friend Movement continues to move forward the reason why it’s going to be so powerful is that it is all about building bridges and uniting us together to really find answers.”