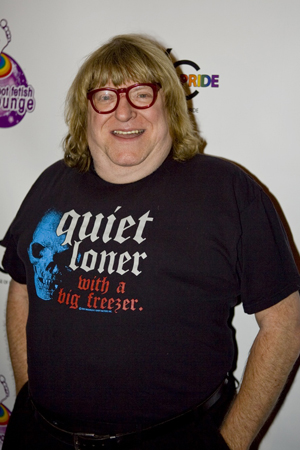 What makes a good celebrity autobiography? “When stars take themselves seriously and believe that people truly care about what they have to say,”Â Bruce Vilanch told us at Barefeoot Wine’s gay pride edition of off-Broadway seriesÂ Celebrity Autobiography, in which celebrities read from ill-advised autobiographies and other writings of their peers. In Vilanch’s terms, then, the evenings works, which included Suzanne Somers’ poetry and David Hasselhoff‘s memoir,Don’t Hassle the Hoff, was full of literary treasures. Vilanch, who read a tediously uneventful passage fromÂ Star Jones‘ memoir,Â You Have to Stand For Something, Or You’ll Fall For Anything about an ex-boyfriend, was joined byÂ John Cameron Mitchell,Â Cheyenne Jackson,Kristen Johnston,Â Mario Cantone,Â B.D. Wong andÂ Rachel Dratch, who read from formerGood Morning America anchorÂ Joan Lunden‘sÂ Good Morning, I’m Joan Lunden, in which the author goes into agonizing detail about the clothes she lays out for herself every morning. (In keeping with the evening’s pride theme we asked Dratch, who is straight, about her frequently being offered lesbian parts. “I guess Hollywood thinks I’m gay,” she laughed. “I’ll consider those parts if I think they’re funny and not stereotypical. It can work with broad humor.” More cat wrangler, please,Â 30 Rock!)

Celebrity Autobiography‘s organizerÂ Eugene Pack told he got the idea to do the show, which has been running in New York for ten years and is slowly making its way to L.A., after readingVanna White‘s memoir,Â Vanna Speaks. “There were these very serious scenes about how hard it is to turn the letters onÂ Wheel of Fortune and, when read aloud, I knew it would make a fantastic comedy monologue.” Pack, however, said the series is not meant to make fun of the celebrities whose works they read, but to serve as a “wink at the memoir.” Sometimes, Pack says, even the most well-intended writers share information “you can’t believe they revealed.”

This perhaps, was best exemplified in a book a bizarre passage fromÂ Geraldo Rivera‘sExposing Myself, read byÂ B.D. Wong, in which Rivera recounts a short-lived love affair withLiza Minnelli, and in which he congratulates himself on not “forcing” himself on her when she shys away from sex. “He said, she said” is also a theme Celebrity Autobiography favors, as shown in their evening’s finale, in which Kristen Johnston, readingÂ Elizabeth Taylor‘s memoir, Celebrity Autobiography co-creator Dayle Reyfel, reading fromÂ Debbie Reynolds‘ memoir, and Pack reading fromÂ Eddie Fisher‘s memoir, all discuss Fisher leaving Reynolds for Taylor from very different perspectives. In Reynold’s memoir, she writes that she caught Fisher cheating on her with Taylor when she called Taylor’s hotel room late at night and Fisher answered. Fisher, however, says he and Taylor decided to tell Reynolds themselves. That was, after all, “the fair thing to do.”