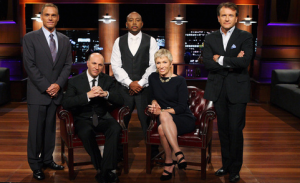 If you thought that ‘Shark Tank’ couldn’t possibly get any more brutal than it already has been, the Friday, November 9 episode was certainly a force to be reckoned with. The sharks were vicious, the criticisms were plentiful, and the condescending laughs were intimidating the aspiring business professionals. Two out of four candidates were unquestionably chewed up, and spit back out.

First up, we had Drew with his “Drive suits.” You’re likely wondering what a drive suit is? Well, it is a wearable recreation device. It is functioned to instantly transform a costumed human from a walking state to a riding one. The project literally drives off the shelves. As difficult as this is to explain, I am speaking the truth. It is exactly what it sounds like. Drew wanted $150,000 for 20% stake. Though they seemed intrigued, all the sharks were on his case about all the mysteries involved with his product. They were recommending he take this transforming costume to a toy company. Drew had two offers, but being the gambler he is, he chose Kevin for $150,000 and 30% stake of the company.

Next up was David with his online PC classes. His main goal was to teach 50+ year old students how to use a computer, which to me, sounds like a universal need. Bruce Vilanch came along as a demonstrator because he said that David taught his Mom how to Skype. David tried to state his case, and to present his product, while Vilanch added humor, but it was obvious that the sharks just weren’t sharing their enthusiasm. Kevin called him a bozo, and he was told he was 30 years too late. They added insult to injury by saying that he gave them a good laugh. Ouch! Did anyone else think the sharks were a little too hard on him?

Following, the rejected David was Bill with Revestor, the real estate search engine of the future…or at least Bill hoped. He came in asking for $250,000 for 10% in his company. Bill was trying to explain how this can simplify a real estate search and help potential buyers find the house they need. However, the sharks just don’t understand his angle or his formulas, and they showed zero interest. If you thought they were hard on David, they were almost equally harsh on Bill. Dang!

The final potential business professionals of the future were two loveable grannies: Beverly & Charlotte. They were asking for $250,000 for 15% stake in their Ice Chips company. Ice Chips candy contains Xylitol – a natural sweetener. They wanted to have an alternative sweetener going rather than the usual sugar, or unhealthy options that are so common today. The sharks seemed to enjoy this sugar free candy, and the enthusiasm of these grannies was simply contagious. Ice Chips are already a big hit, being sold in health food stores, and dentist offices. The sharks could tell that these ladies knew their market, and they were not afraid to make offers. This was the most interesting product of the night as the negotiations got downright crazy. It seemed that everyone wanted the Ice Chips stake, and that they were stopping at nothing to get it. In the end, the grannies chose Mark and Barbara.