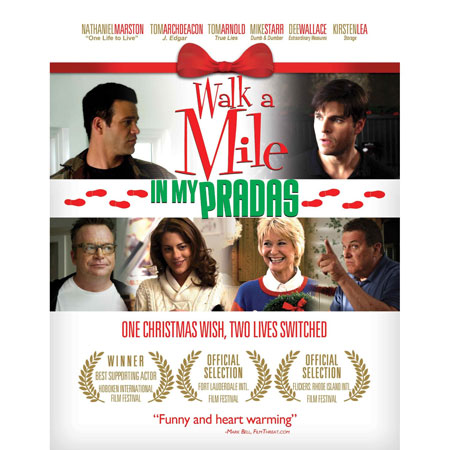 One of the themes that seems to be emerging in populist gay cinema at the moment is doing LGBT versions of stories that mainstream movies have played with numerous times before. For example a couple of months ago we had a gay Christmas Carol with Scrooge & Marley, and now the Freaky Friday body swap film that gets a homo spin – although this time it’s a sexuality swap.

Tony (Nathaniel Marston) is a macho construction worker who’s preparing to marry his girlfriend. His latest job puts him under the supervision of the openly gay Steve, which brings Tony’s homophobic tendencies bubbling to the surface, culminating in a row at a Christmas party. They accidentally cast a festive wish on one another in front a magical Christmas angel which results in Tony becoming gay and Steve turning straight.

As you can probably guess, this causes more than a few issues, with Steve’s boyfriend very confused by his partner’s sudden interest in breasts, while Tom has no idea why he’s spent his entire life thinking about women but is now fantasising about guys. It also puts a fly in the ointment of his wedding plans.

Hijinks ensure, lessons are learned and much confusion arises (although more unexpectedly the bride-to-be seems amazingly tolerant of her beau’s new tendencies). It’s all pretty genial, with some funny lines and a tone that tries hard to keep you entertained.

Admittedly it treats sexuality in an overly simplistic fashion, so that a lot of interesting questions about a gay man becoming straight and vice-versa are either ignored or glossed over, but it’s not the sort of film that wants you to take things too seriously. It just wants to have a bit of fun and leave us with a simple message about tolerance (and you can guess what that message is from the title).

Unusually for a low budget gay movie, a few familiar faces turn up such as Tom Arnold and Dee Wallace. There’s also a brief cameo from comedian and writer Bruce Vilanch, who’s increasingly becoming a compulsory part of every American LGBT comedy – seriously, this is the third gay movie I’ve reviewed in the past six months that he’s popped up in.
It’s not an amazing movie, but it’s entertaining enough and should keep you entertained.

Overall Verdict: A body-swap flick for sexuality is a great idea, and while we may have to wait for the definitive take on this set-up, Walk A Mile In My Pradas is pretty entertaining.