www.laist.com
Los Angeles Will Celebrate the First Ever â€œHarvey Milk Dayâ€ Tomorrow
By Kristy Pyke in Arts & Events on May 21, 2010 3:30 PM 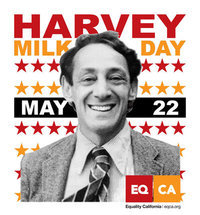 In honor of what would have been Harvey Milkâ€™s 80th birthday, Governor Arnold Schwarzenegger has declared tomorrow to be the first ever â€œHarvey Milk Dayâ€. The day will be celebrated with special appearances, demonstrations, BBQâ€™s, and events all over Los Angeles County.

Starting at 10 a.m. tomorrow volunteers will also gather at the East Los Angeles Service Center to hear speakers such as screenwriter Dustin Lance Black, who wrote popular film Milk, and United Farm Workers co-founder Dolores Huerta. The volunteers will then go door-to-door gaining support for marriage equality. Later in the afternoon Sharon and Kelly Osbourne will host a celebration and fundraiser at their home in Hidden Hills. Tickets start at $150 and all proceeds will go to Equality California.

Then at noon over in West Hollywood, Mayor Pro Tempore John Duran will honor Harvey Milk with the introduction of the â€œHarvey Milk Schools Projectâ€ that seeks to promote anti-LGBT bullying. West Hollywood will end their day with a performance from the Gay Menâ€™s Chorus of Los Angeles starting at 7 p.m. at Fairfax High School Auditorium.

But the celebration continues on to Sunday afternoon for Los Angelians. In Brentwood from about 1 p.m to 4 p.m a family BBQ and picnic will launch the creation of EQCAâ€™s Families Advisory Council, a faction of LGBT dedicated to reaching parents and children.