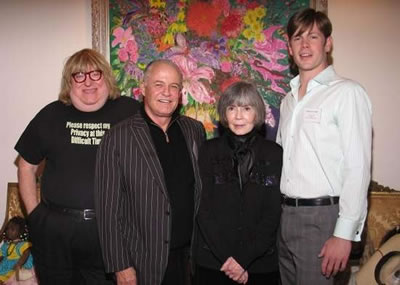 But last week’s assembled crowd of more than 200 cheered in agreement, obviously feeling pretty special themselves as they strolled the rolling grounds of Rice’s estate overlooking a private lagoon and the twinkling lights of Rancho Mirage far below.

Anne and her son Christopher greeted their visitors warmly, but she spent part of the evening resting in her study, where she recently completed her 28th book, â€œCalled Out of Darkness â€” A Spiritual Confession.â€

The book is in full distribution now but Rice’s national promotional tour had to be canceled after a diabetic episode hospitalized her a few months ago.

The party was a fundraiser for the Lambda Literary Foundation, founded in 1996 , and the country’s leading advocate of LGBT (lesbian, gay, bisexual and transgender) literature.

Christopher Rice, a respected novelist in his own right, is now working on his fifth novel and credits Lambda with helping him when he most needed it.

Bruce Vilanch’s talk ranged from the very funny: â€œ Sorry I’m late, but I write for the Oscars and last year’s show is just now endingâ€ to the very serious: â€œIt took from 1968 to 2008 for blacks to get from Martin Luther King to Barack Obama. It may take that long again for the LGBT community to win our civil rights.â€

Following Vilanch, but holding her own, was Patricia Nell Warren, author of the groundbreaking book â€œThe Front Runnerâ€ in 1974. Now, with eight LGBT-themed novels, her book sales have passed the 10 million mark.

Warren also said, â€œI can’t believe I’m in Anne Rice’s house and that she paid for this entire event!â€ Then she added, â€œAll nonprofit groups are suffering from donor fatigue, but no one does what Lamda does. It is our written words that will be heard by the world, and no one else can do what Lamda is doing for our authors.â€

Lambda’s executive director, Charles Flowers, recently moved the charity’s headquarters from New York to Los Angeles and is working with desert libraries and colleges to create some local events.

â€œWe hope to have an active desert program soon,â€ he said, â€œconcentrating on the many fine LGBT writers in this area; but right now we are fighting for survival. The current political and economic crises are testing us as never before.â€

At one point, a large group of locals was voicing opinions on everything from the recent elections to next year’s high season, but there was one thing they all agreed on, â€œWe can’t believe we’re standing in Anne Rice’s house.â€

Betty Francis manages the society pages, photos and guest-reporter program. She can be reached at 341-4080 or BECHA1@aol.com.