What: Big and Tall: An Evening with Bruce Vilanch and Judy Gold 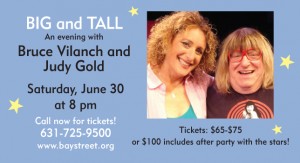 Multi-Emmy Award winner Bruce Vilanch and comedian Judy Gold bring their comedic acts to Bay Street Theatre for one night only at 8 p.m.

Show tickets for $100 include an after-party where you can top off the night with Vilanch and Gold while enjoying wine, refreshments, and hors d’oeurves.`