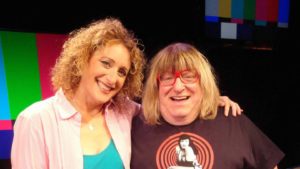 Together, Bruce and Judy will fill the BIG & TALL order of making you laugh and laugh!

BRUCE VILANCH is a six-time Emmy Award-winning comic who’s best known for his four-year stint as a celebrity participant on Hollywood Squares. His stand-up routine draws on his years of being a Hollywood insider and earned him the role of head writer for the Oscars — writing for hosts Billy Crystal, Alec Baldwin, Steve Martin and others He’s also written hysterical material for other award shows, television series and variety specials.

JUDY GOLD is also an Emmy Award-winning actress and comedian, best known as the star of her two critically acclaimed, long-running Off-Broadway hit shows, including “25 Questions for a Jewish Mother.” Judy recently appeared on The Late Show with Stephen Colbert, can be seen on the new Showtime series I’m Dying Up Here, Netflix’s Friends From College, and she has recurring roles on Pop TV’s NightCap!, and TBS’s, Search Party. Judy is the host of the hit podcast Kill Me Now on CBS’ play.it and iTunes.