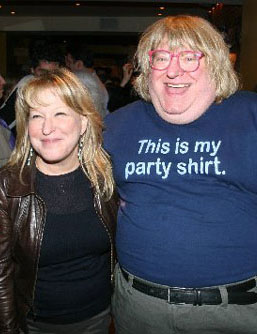 If I was forced to name the funniest person alive I would probably insist on a tie, Dame Edna and Bruce Vilanch. Force me to pick only one…give me Bruce! Bruce Vilanch is the most famous person you may have never heard of. He is head writer for The Ocars, and writes The Emmy’s, The Tony’s and The Grammy’s. Bette Midler says he is â€œThe first man to put something in my mouth that made us both money!â€ A line I would be willing to bet he wrote for her.
The first e-mail I get from Bruce contains the subject line â€œwith pleasureâ€. I thought I had gotten another of those annoying emails promoting straight porn. Luckily I noticed it was from him, and was able to catch up with him at his L. A. home.

Bruce was born in New York City and was adopted at four days old. He was raised by a woman who was a great lover of all things show, â€œand still does, and nothing will dissuade her.â€ He tells me. â€œNo matter how many horror stories I lay at her feet she still loves it.â€ This love of show business made it natural for him to join the fray. â€œPartially, why I got into the business was because she approved of it wholeheartedly.â€

In researching for this story I found multiple accounts of his start in show business as a chubby child model for Lane Bryants ‘Charming Chub Division’. I found this a little hard to believe. I accuse Bruce of posting that on Wikipedia as a joke. â€œIt was a joke in my act, I haven’t touched my wikipedia page, because they have my birthday as a year later than it really is, if wikipedia is your only source you are in troubleâ€

Bruce’s Career in show business really started as an entertainment writer for the Chicago Tribune. â€œIn my parents unending quest for me to do something that would make a living, they steered me into journalism because that seemed like a great outlet for my writing and it looked like it would be more lucrative than my performing.â€ It was his revue of Bette Midler’s performance in Cabaret that would start him down the path that has made him the most sought after comedy writer in all of Hollywood.

â€œI didn’t know it at the time, but that was a turning point. I think it was taking me in the direction I was meant to go. Bette always says ‘oh, you had your bags packed the day I met you!’ The truth of the matter is that I was having a good time in Chicago, but I was never comfortable chronicling the achievements of others. I wanted to have some achievements of my own.â€

The relationship that formed between Bruce and Bette had its beginnings when Bruce invented the Sophie Tucker character that has become legendary, and includes him writing the song she sang to Johnny Carson as his final guest, and writing her sitcom â€œBetteâ€.

But Bette was just the beginning. â€œAfter five years in Chicago I came Hollywood to do a TV show with The Manhattan Transfer, and back in the day there was a lot of variety television.â€ If it was variety Bruce was writing it, Donny and Marie, The Brady Bunch Hour, and The Paul Lynde Halloween Special. What I wouldn’t give to have been on that set! â€œThat lead to the Academy Awards because that after all is the biggest variety special of all.â€

In 1999 Bruce was chronicled in the documentary â€œGet Bruceâ€, which is what everyone says when they need to be funny, I recommend a DVD rental of this fascinating look at The Funniest Man Alive. His phone never stops ringing, and the most fascinating part, is who is on the other end. Bruce is the goto guy for the likes of Whoopi Goldberg, Robin Williams, Lily Tomlin, Billy Chrystal, Rosanne and Rosie O’Donnel among others.

Think he has some stories? You bet he does, and He brings them all to Q Cinema 13 this weekend. Q Cinema is Fort Worth‘s amazing Gay and Lesbian Film Festival, and Q Cinema Director Todd Camp takes this Nationally recognized event to a new level of fabulousness with An Evening with Bruce Vilanch. â€œBasically I get to tell stories about my ridiculous career. I make various observations about the world in general, and I tell stories about people you all know. And a lot of backstage stories.â€

Now for the big question, Is Bruce single? â€œI am, and I am holding open call auditions in the Dallas/ Fort Worth Metroplex, everything is bigger in Texas, Thank God! I am hoping to meet a longhorn or two!â€

Bruce comes to town this weekend for the Q Cinema Film Festival, An Evening with Bruce Vilanch promises to be a night of Comedy and Dirt that must not be missed. Bruce performs at The Rose Marine Theater, 1440 North Main Street, Fort Worth, 76106. Tickets are $30. Smart Queens will but tickets for A Bunch of Bruce. For $50. enjoy the show and then go â€œBowling with Bruceâ€ at the Lucky Strike Lanes, 2845 West 7th Street, Fort Worth, 76107. Tickets for this and all Q Cinema Events this weekend are available at www.qcinema.org. See you there!!!