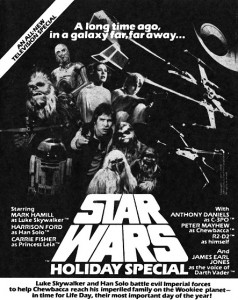 Star Wars is a titan of the film industry. The first film was a massive success, and since then, the series has seen massive hits with movies, TV shows, books, video games and more. A new film is hitting theaters next month, one that is greatly anticipated by many.

However, one part of Star Wars that featured the original cast has never been officially released and is considered one of the most notorious television specials of all time—the Star Wars Holiday Special. It aired only once to this day, on CBS on November 17th, 1978.

It featured a variety of loosely-connected segments and skits along with stock footage. Some examples of content in the special include the Bea Arthur character running the Cantina on Tattooine, an entire musical segment featuring Jefferson Starship, and Harvey Korman as a four-armed alien that sounds like Julia Child.

Notably, the popular character of the bounty hunter, Boba Fett, made his Star Wars debut in the special, before his appearances in later Star Wars films.

The special has never been officially released, but has gained a cult following as copies can be found online and in trading circuits.