This past weekend, George Lucas released his fairytale musical fever dream, Strange Magic. A movie in which fairies sing ELO and Lady Gaga for 99 minutes. But that wasn’t the only bizarre venture that Lucas has tried to develop. Here are the 10 weirdest projects Lucas worked on throughout his career. 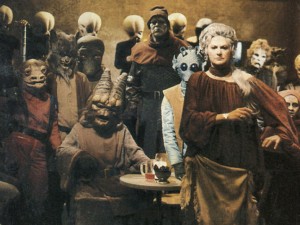 Prominent in the pantheon of Lucas-related misfires is his 1986 pet project Howard the Duck. Scripted by his frequent collaborators Willard Huyck and Gloria Katz, it destroyed the considerable underground cred of Steve Gerber’s wisecracking creation and turned him into a running joke that endured at least until Jar Jar Binks could come along to take some of the heat. Huyck, Katz and executive producer Lucas somehow thought it wise to take a gonzo sendup of ‘funny animals’ cartoons and repackage the concept as two hours of strained quirk, inane duck jokes and bland adventuring that sees Howard teleported to Cleveland to hit on a hapless Lea Thompson and fight a possessed Jeffrey Jones.

When Michael Eisner and Frank Wells were appointed to run Disney in 1984, one of their mandates was to revitalize the company’s theme parks. That year also saw Michael Jackson at the height of his popularity, prompting Eisner and Wells to engineer a collaboration between George Lucas and his moonwalking superfan to see what delirious excess could come of such an endeavor. The result was a 17 minute 3D film, co-written and produced by Lucas (and directed by Francis Ford Coppola), that starred Jackson as the titular commander of a ragtag starship crew tasked with delivering a gift to the evil Supreme Leader of a decrepit planet. Met with hostility, the Captain nevertheless decides to reform the locals and their Leader with the Power of Song. Exhibited in Disney’s theme parks, the film stunned audiences with then-cutting edge special effects and 3D technology. Less of a technological marvel today, Captain EO is more striking for its camp value, catchy musical hooks and the impressive design of Angelica Huston’s vaguely H.R. Giger-ish space queen.

When Lucas was a young film student, one of his great heroes was disk jockey Wolfman Jack. So when Lucas made his big film, set in the early 1960s, he made sure to give Wolfman Jack a huge cameo — in which Wolfman Jack is sort of a disk jockey version of Obi-Wan Kenobi. He tries to pretend that he’s not actually Wolfman Jack, although he doesn’t actually say “Now that’s a name I’ve not heard in a long time.” And he’s sort of mysterious about his relationship with the reclusive Wolfman, while also dispensing strange wisdom. Wolfman Jack told New York Magazine he only took a flat fee to be in the film, and actually spent $10,000 of his own money to promote it. “We wanted this picture to take off,” Wolfman said, “It’s what I’m all about. Nonsensical, but loving.” (Related: See Wolfman Jack meet the Cylons in Galactica 1980.)
4) “Nuking the Fridge“

Actually, both Steven Spielberg and George Lucas have tried to take the blame for the infamous sequence in Indiana Jones and the Kingdom of the Crystal Skull where Indy shelters from a nuclear explosion inside a refrigerator. Lucas says Spielberg is lying about the fridge thing being his idea, because “he’s trying to protect me.” In fact, Lucas put together a whole “nuking the fridge” dossier to prove that it was plausible and quiet the concerns of Spielberg and star Harrison Ford. (And to bolster Lucas’ story, here’s an interview with the librarians at Skywalker Ranch, where they explain that they were assigned to call a nuclear physicist and get more information on how a fridge really could protect you from an atomic test.) Lucas also takes a certain amount of blame for Crystal Skull in general, since he nixed a previous script by Frank Darabont that might have been slightly better.

We couldn’t possibly leave this one out, although Lucas has tried to have it suppressed. We only wanted to have one Star Wars item on this list, and there’s one clear candidate that stands out above everything else — the prequels, the Ewok cartoon, everything. To be fair, Lucas didn’t oversee the filming of the Holiday Special, but he does bear a significant amount of blame for its legendary awfulness.

This 2008 Vanity Fair article goes into insane detail — basically, Lucas had been convinced by various people that a holiday special would keep interest in Star Wars alive and sell some toys. And Lucas was originally quite involved — he ” knew the tales he wanted to tell and planned to work with the show’s team of seasoned TV writers to develop his ideas into a viable script.” And that’s where things went wrong:

When [writer Bruce] Vilanch heard Lucas’s storyline at a development meeting at Smith and Hemion’s L.A. offices, he quickly realized that a “big challenge” lay ahead. Lucas was intent on building The Star Wars Holiday Special, as it would be called, around Wookiees—specifically, the family of Chewbacca, Han Solo’s shaggy sidekick, as they outwitted Imperial forces to come together on Life Day, the Wookiee equivalent of Christmas. Suddenly, Vilanch says, the special was in danger of looking like “one long episode of Lassie.”

“I said: ‘You’ve chosen to build a story around these characters who don’t speak. The only sound they make is like fat people having an orgasm,'” the 250-plus-pound Vilanch recalls. “In fact, I told Lucas he could just leave a tape recorder in my bedroom and I’d be happy to do all the looping and Foley work for him.”

Lucas met these comments with a “glacial” look. “This was his vision, and he could not be moved,” Vilanch says.
Lucas insisted on the Wookiee life day story, and then got swamped working on other stuff, letting the Holiday Special happen more or less unsupervised. And it “metastasized,” as the Vanity Fair article delicately puts it:

Onto the body of Lucas’s sentimental and irony-free Wookiee plotline, the producers and writers grafted a campy 70s variety show that makes suspension of disbelief impossible. In between minutes-long stretches of guttural, untranslated Wookiee dialogue that could almost pass for avant-garde cinema, Maude’s Bea Arthur sings and dances with the aliens from the movie’s cantina scene; The Honeymooners’ Art Carney consoles Chewbacca’s family with such comedy chestnuts as “Why all the long, hairy faces?”; Harvey Korman mugs shamelessly as a multi-limbed intergalactic Julia Child cooking “Bantha Surprise”; the Jefferson Starship pops up to play a number about U.F.O.’s; and original Star Wars cast members Harrison Ford, Carrie Fisher, and Mark Hamill walk around looking cosmically miserable.
The whole Vanity Fair article is well worth reading.

Lucas dreamed up the idea for Willow as early as 1972 and, during production on Return of the Jedi, approached Warwick Davis (who also played Wicket the Ewok) about playing the lead role. But it wasn’t till the mid-80s – by which point FX technology was sufficiently advanced – that the film was finally shepherded into production with Ron Howard as director and Lucas as EP. Davis plays the hobbit-like lead, tasked by a wizard to safeguard a magical child from a witch queen. Somewhat of an ersatz Lord of the Rings, the film’s archetypal characters and narrative broad strokes also bear more than a passing resemblance to Star Wars. That said, a few lively performances and action set-pieces redeem the tired story beats to some extent. Extra points for (perhaps not so) affectionate swipes at movie critics Roger Ebert, Gene Siskel and Pauline Kael.

7) Chronicles of the Shadow War

Lucas, apparently, wasn’t quite done with the Willow universe. He hired famed X-Men comics writer Chris Claremont to collaborate with him on a trio of novels – starting with 1995’s Shadow Moon – that continued the story begun in the 1988 movie. Lucas clearly wanted the novels to stand on their own merits, repainting what was once a straightforward, almost childlike fictional universe in much darker tones. He and Claremont go Alien 3 on the story from the very beginning, killing off half the old cast in brutal fashion, then going on to detail — via some ornate and sometimes explicitly violent prose — a deeply troubled world in which the film’s characters appear almost incongruous.

8) Twice Upon A Time

Lucas has made more than a few contributions to the animation industry over the years but the first animated film he ever produced was 1983’s all but forgotten Twice Upon A Time. A marvel of surreal stop-motion animation, it follows shapeshifter Ralph the All Purpose Animal and his mime sidekick Mumford as they try to save their world from nightmare-creator Synonamess Botch. The film sank unfairly from trace after a brief theatrical release that was mishandled by the floundering Ladd Company. That commercial failure, however, does nothing to negate the value of its distinctive aesthetic, unique ‘Lumage’ animating technique and imaginative worldbuilding.

One of Lucas’ more successful (creatively speaking anyway) forays into television, The Young Indiana Jones Chronicles brought the epic historical sweep of the films to the small screen. Following a teenage Indy as he traveled the world and encountered numerous historical figures, the show was intended in part as educational programming but still managed to pack enough action to draw accusations of being too violent. Despite the inclusion of many clunky dialogue exchanges that are basically thinly disguised classroom lectures, the show was buoyed by its production values and a colorful supporting cast featuring franchise veterans like Harrison Ford, Roshan Seth and John Rhys-Davies as well as stars-to-be like Daniel Craig and Catherine Zeta Jones. Among other things, Young Indiana Jones goes to India and meets Krishnamurti, who was being groomed as the young World Teacher by the Theosophical Society, and also befriends a young slave named Omar in Tangiers, getting captured himself by slavers. Alongside producing, Lucas also came up with the blueprints for many of the stories and, once ABC cancelled the show, was invested enough in the end-product to finagle a deal with the Family Channel for four additional TV movies.

This massive development, which will dominate Chicago’s lakefront, is “going to look like a tent monster that’s slowly devouring the city,” as the AV Club put it. This collection of Lucas’ art and movie memorabilia is being described as a “vanity museum,” and has been challenged by environmentalists among others. The Chicago Tribune’s architecture critic called it the Temple of George, adding:

Our First Look at the Radical Design of George Lucas’ Art Museum
A few months ago, noted traditionalist George Lucas surprised everyone by announcing he had chosen…
Read more gizmodo.?com
The plan represents a fumbled essay in “blob architecture,” a school of design that uses computer modeling to achieve amorphous, amoebalike buildings that defy conventional, right-angled geometry. In its present state, it lacks the visual excitement of a blob masterpiece like the billowy Selfridges department store in Birmingham, England. Overly abstract and under-detailed, it looks, from some angles, like a giant lump…

The real problem is that Lucas has saddled Ma with an overly ambitious program that calls for the museum to house everything but a re-creation of the fictional “Star Wars” bar habituated by freight pilots and other dangerous characters.

In addition to galleries for Lucas’ eclectic collection of paintings by artists like Norman Rockwell, “Star Wars” memorabilia and digital art, the museum would contain archives, an education center, four movie theaters and, atop all that, a circular restaurant and a halo-shaped observation deck. At 400,000 square feet, it would be more than four times the size of the one that Lucas unsuccessfully tried to build in San Francisco.