Broadway World
The Stars Come Out in Support of LGBTQ Community and to Honor Stephanie Beatriz and Julie Newmar
by BWW News Desk Jun. 9, 2018 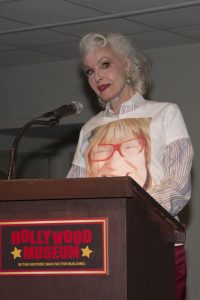 President/Founder of The Hollywood Museum, Donelle Dadigan, along with Council Member Mitch O’Farrell and Board President Esteban Montemayor of Christopher Street West, kicked off Pride weekend with the annual “Real to Reel” exhibit that shines the spotlight on the Lesbian, Gay, Bisexual, and Transgender (LGBTQ) community in television and film through the decades. This year’s event also feature a special recognition with The Future of Hollywood Award presented to actress Stephanie Beatriz and the Legacy Award to TONY Award winning actress, Julie Newmar.

“I was thrilled to attend The Hollywood Museum for the opening of the REAL TO REEL exhibit the other evening, to kick off Gay Pride here in L.A,” said Geri Jewell of Deadwood fame. “It was wonderful coming together with friends and colleagues in support of another part of the spectrum of diversity.”

Reminiscent of Mae West, Ms Julie Newmar was carried on stage in the arms of two bodybuilders, stating “This what happens when you’re a legacy. You don’t have to walk anywhere. You are carried.”

“Thank you all for this lovely tribute,” she added. “It’s so wonderful to receive it in this building, the old Max Factor salon, where for so many years so many of the greats found their external beauty and also discovered their internal beauty. Donelle Dadigan (Founder/President of the Hollywood Museum, formerly The Max Factor Studios) has given the world a priceless time capsule for generations to enjoy for years to come. Im particularly thrilled to get this recognition right now in the midst of the Me Too and Times Up moment of our history,” remarked Ms Newmar.

“I always had my own way of dealing with those situations. First of all, I was taller than most of the men. So right away, I had an advantage. And one of my early roles, on Broadway and on film, was a gal called Stupefyin Jones in LI’l ABNER. Men saw her and they turned to stone. And this was before Viagra. I think some of them thought I actually had that power. And perhaps I did. Im also delighted to receive this acknowledgment in conjunction with all the LGBT pride activities here at the Museum and around the country this month. Of course, there has always been a strong LGBT presence in my life … even BEFORE Catwoman. But to be reminded of it at this critical time, and to know that it is indeed part of my legacy, and that my legacy is not only an artistic one, but one of feminine strength, power and, lets never forget, fun thats a very, very good thing and it fills me with overwhelming gratitude.”

Honoree, Ms Stephanie Beatriz, commented on similarities of her Brooklyn Nine-Nine character, Rosa Diaz’s sexual identity struggles and her own experiences since she came out to family and friends about her own life. “Just like Rosa, I found support from my friends and colleagues, but less so from my family and the Latin community.”

The Hollywood Museum’s REAL to REEL: Portrayals and Perceptions of LGBTQs in Hollywood exhibition opened to the public on Friday, June 8th, to coincide with the annual Christopher Street West Pride activities. Spanning 100 years, the 2018 exhibit is a salute to the LGBTQ community’s contributions to the entertainment industry. Now, in its fifth successful year, the REAL to REEL: Portrayals and Perceptions of LGBTQ in Hollywood exhibit, is offered in partnership with Los Angeles City Council member Mitch O’Farrell (CD-13) and LA Pride, as an educational, entertaining and informative retrospective of LGBTQ images in film, TV, new digital platforms featuring costumes, props, photos, and iconic imagery all telling the story of the milestones and influence that LGBTQ characters and plot lines have had in Hollywood from early stereotypes in silent films to modern-day representations. Additionally, REAL to REEL celebrates LGBTQ Icons by paying homage to those individuals who support the LGBTQ community.

“We are both honored and humbled by the response to last nights program for the 5th annual REAL to REEL exhibit opening. The outpouring of love and positiveness was shared by both the entertainment and LGBTQ communities. The words of inspiration from actress Stephanie Beatriz, the Future of Hollywood Award recipient, blessed all that were in attendance and the overwhelming applause and response to comments from our Legacy Award honoree, TONY Award winning actress Julie Newmar, was worthy of her iconic stature. We are grateful to Council member Mitch O’Farrell and LAPD Assistant Chief Beatrice Girmala, LA City Controller Ron Galperin and Board President Esteban Montemayor of Christopher Street West for their trust in us. Without their integrity and support, all this effort would mean nothing.”- Donelle Dadigan (President/Founder of The Hollywood Museum)

Recording artist Roslyn Kind exclaimed, “What a GREAT Evening at The Hollywood Museum and the perfect way to kick off PRIDE month 2018, by celebrating all the wonderful contributions of the LGBTQ community to Hollywood’s rich history in the Arts and Culture with the “Real To Reel” Exhibit. Donelle Dadigan does a fantastic job.”

The museum houses more than 10,000 Authentic Show Business Treasures spotlighting more than 100 years of Hollywood history – from the Silents to Talkies, to Hollywood’s Golden Era, Film Noir, Television and its Pioneer Years, through the rebellious 60s, special effects 70s, evolving 80s, involved 90s, technological 2000s, and beyond to current day heartthrobs! The Hollywood Museum’s exhibits showcase the best in film, network and cable television, and new digital platforms featuring iconic and fan favorites! Named one of the top tourist attractions by LA Weekly, voted one of the Top 10 Museums in LA by the Los Angeles Tourism & Convention Board, and annually receives the Certificate of Excellence from Trip Advisor. Located in the heart of Hollywood, at the corner of Hollywood Blvd and Highland Ave – The Hollywood Museum in the historic Max Factor Building is the “Official Museum of Hollywood” and offers visitors the most extensive collection of Hollywood memorabilia in the world featuring the glamour of Hollywood legends and stars – past, present and in the making…. See one-of-a-kind costumes, props, photographs, scripts, stars’ car collections, personal artifacts, posters, and memorabilia from favorite stars, films and TV shows. The Hollywood Museum is a 501(c)(3) non-profit corporation.