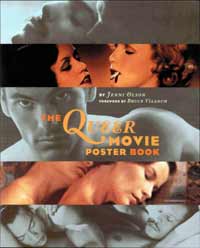 Films about “the love that dare not speak its name” have been around for decades, but only recently have they formed an out-and-proud genre. In the first overview of its kind, The Queer Movie Poster Book traces the history of gay film through its posters and promotional art. Sometimes alluring, sometimes lurid, often coded, the posters speak volumes about the social mores of the times and the struggle for queer identity. Historian Jenni Olson includes over 150 posters — from Wallace Beery drag follies to the latest indy productions — which showcase the varied spectrum of queer cinema. Fascinating sidebars discuss dykesploitation films (typically made by straight men for straight men), gay porn (an overlooked means to social liberation in its own right), and films with transgender themes (studded with pulled-from-the-headlines movies). From the earnest to the campy, The Queer Movie Poster Book constitutes a vibrant feast of popular art and a valuable document of gay film culture.

Author Biography: Jenni Olson is one of the world’s leading experts on queer film. A filmmaker currently developing her first feature, she lives in San Francisco.

Bruce Vilanch is lead writer for the Academy Awards® ceremonies, and one of the most sought-after jokesmiths in the entertainment industry. He lives in Los Angeles.