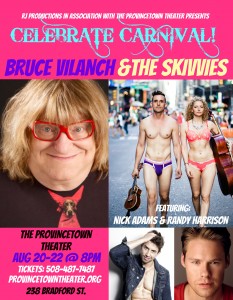 “To my knowledge, this is the first time this theater has brought in a Broadway concert series,” says Aronstein.

A quick 10-minute walk from Commercial Street, the Provincetown Theater offers a creative mix of professional, semi-professional and talented non-professional productions. The company emphasizes a mixture of staged readings, original plays and works by established playwrights, but this is something new for them. This summer’s three remaining shows offer sassy celebrities, showstoppers and even a little skin.
“The Buds of Broadway,” starring Anthony Rapp & Telly Leung, makes its world premiere for two nights only on August 14 and 15.

Perhaps best recognized for his recurring role as “Wes” in the hit Fox series “Glee,” Telly Leung recently starred in the Broadway revival of “Godspell” and originated the role of Boq in the Chicago company of “Wicked.” Anthony Rapp starred opposite Idina Menzel in the Broadway Musical “If/Then” and is best known for originating the role of ‘Mark Cohen’ in Jonathan Larson’s Tony Award-winning rock opera “Rent” for which he shares an OBIE Award with the rest of the cast.

These two buds first met on the “Rent” tour and their friendship continues with frequent collaborations. “Buds” will feature an eclectic mix of music including pop, R&B, Broadway, and rock with standout solos and duets from the show that began it all, “Rent.”

Having written for Whoopi Goldberg, Billy Crystal, Alec Baldwin, Steve Martin, Bette Midler, Paul Lynde and many others, Vilanch plans to share some of his best stories about life with Hollywood celebrities. Also a consummate performer Vilanch starred as “Edna Turnblatt” in the hit musical “Hairspray” on Broadway and appeared as himself in the documentary film “Get Bruce!”

Joining Bruce on the stage the “musically thrilling” undie-rock, comedy-pop duo The Skivvies will actually undress as they perform their distinctive mash-ups and eccentric originals for cello and ukulele. This YouTube sensation has been called “smart, sophisticated…ingenious,” by The Wall Street Journal and Out Magazine says, “The Skivvies have managed to carve out a niche that we never knew needed to exist: part Weird Al- parody and part sexy burlesque…and unusual explosion of satire and sultry.”

The excitement doesn’t end there; “Broadway Bares'” Nick Adams and “Queer as Folk’s” Randy Harrison will join the team to fill the stage with more music and man-parts.
When Tony-nominated sisters Ann Hampton Callaway & Liz Callaway combine musical forces, their equally splendid voices harmonize in great songs and witty banter, as “Sibling Revelry” closes out the concert series on August 28 and 29. First presented in New York and now having its Provincetown premiere, this show continues to sell out halls across the U.S. and abroad.

Though they have each made name for themselves separately, Ann as an acclaimed pop/jazz singer and songwriter and Liz as a Broadway veteran and recording artist, together this duo has been called “two exuberant, limitless talents.” The show features Broadway hits from “Chicago,” “Wicked” and “Cats” to rousing renditions of jazz and pop standards.

The Broadway Concert Series is certain to become a Ptown tradition, so spend your hot August nights with glamour, comedy and music. We’re so certain that you’ll want to attend all of these events that, for a limited time, Edge Media Network is offering a pair free tickets. To get them just head over to our giveaway center and enter to win. (http://www.edgeptown.com/giveaways/theatre)

For tickets and more information, call 508-487-7487 or visit www.provincetowntheater.org.