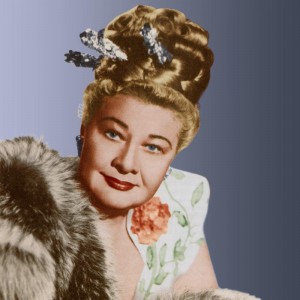 She was one of the most celebrated and successful performers of the 20th century, but few people are aware of Sophie Tucker today. Despite the loving tributes performed by Bette Midler in her concert appearances over the years, the “Last of the Red Hot Mamas” has lapsed into showbiz obscurity, something that William Gazecki‘s loving documentary clearly hopes to correct. Recently showcased at the New York Jewish Film Festival, The Outrageous Sophie Tucker should have a long life in ancillary markets after its theatrical release later this year.

The film’s true auteurs are producers Susan and Lloyd Ecker, who became fascinated with the singer after seeing Midler delivering Sophie Tuckers jokes in her act in 1973. The film, part of the couple’s burgeoning cottage industry about the performer—they’re written a book and plan to create stage, film and television shows about her—features them prominently as talking heads alongside such figures as Barbara Walters, Tony Bennett, Bruce Vilanch, Carol Channing, Michael Feinstein and many others.

There was no shortage of raw material from which to work, as the detail-obsessed Tucker compiled over 400 scrapbooks from 1906 to 1966 chronicling her life and career.

Tucker began her show business career singing at her Russian immigrant parents’ kosher restaurant in Hartford, Connecticut. She appeared on the vaudeville circuit, often performing in blackface, before eventually moving to New York and getting her big break with the Ziegfeld Follies. Ironically, she was soon let go when the other female performers refused to go on with her for fear of being eclipsed.

By 1929 she was arguably the biggest female star in the world, and she continued to be a major concert draw until not long before her death in 1966. She was never quite able to cross over to Hollywood stardom, although the documentary includes clips of her memorable appearance in MGM’s BroadwayMelody of 1938 opposite Judy Garland, to whom she became a mentor.

Her larger than life personality, bawdiness, uninhibited sexuality and willingness to celebrate her ample girth made her a unique performer, but it was her genius for self-promotion that truly served her well. Barbara Walters, whose father’s Latin Quarter nightclubs in Miami and New York regularly featured Tucker, amusingly describes how the performer would sign copies of her memoir after her shows, refusing to autograph anything else or even to make change (all the money was going to Israel, she would assure her customers). She also had a huge number of product endorsements, including her own line of soap.

Her friends were legion, including everyone from Al Capone, with whom she played cards, and J. Edgar Hoover who, the film purports, once asked to borrow one of her dresses. It wouldn’t fit, she assured him.

The film has its share of missteps, such as the awkward animating of old still photographs and the excessive commentary from the producers, with Lloyd Ecker even tearing up while describing Tucker’s death at age 79 nearly a half century ago. And some of the anecdotes related, including a second-hand account of U.S. soldiers blasting her recording of “My Yiddishe Mama” on the streets of Berlin after Germany surrendered as a tribute to a fallen comrade, seem more than a little apocryphal.

But for a younger generation who think that Madonna and Lady Gaga represent the heights of outrageousness, The Outrageous Sophie Tucker stands as a much needed reminder that they have a very large debt to pay.