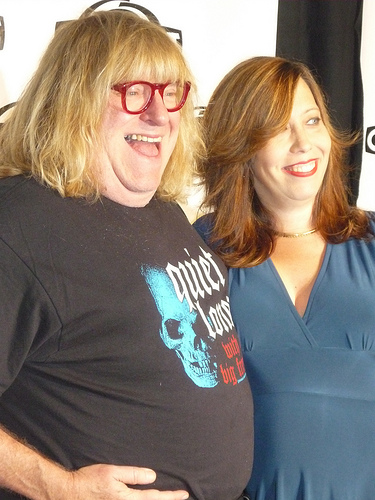 Sorry Iâ€™m so late with this but so much to do, so little time.

The Outfest Legacy Awards on Wednesday was such a nice evening at the DGA. There to honor writer/director/producer Alan Poul was his Tales of the City star Laura Linney. Bruce Vilanch was, as always, a very funny host and others present included Peter Paige, Wilson Cruz, Rex Lee, Alex Oâ€™Loughlin, Calpernia Adams, Candis Cayne and Outfest Executive Director Kirsten Schaffer.

The Legacy gala benefits The Outfest Legacy Project for LGBT Film Preservation. Itâ€™s the only program of its kind in the world and anyone who has seen restored versions of such films as Parting Glances, Word is Out: Stories of Our Lives, Choosing Children and Queens at Heart (unveiled Wednesday night) knows how important and impressive this work is.

Without the restoration, many LGBT works would fade into oblivion and along with it a big chunk of LGBT history that is well worth preserving.

Miss Linney tried her best to avoid the spotlight telling photographers â€œitâ€™s Alanâ€™s nightâ€ and declined to pose for any photos alone. But she was happy to do interviews to talk about her friend and her love of Tales of the City and its sequels. (See my Linney interview by clicking HERE).

I chatted with Mr. Poul before the ceremony and he said when he found out he was being honored his first question was â€œWhy?â€

â€œThey had to explain to me that the Legacy Award is given as part of a benefit for the Legacy Project which is something that I very much support and think is important,â€ he said.

â€œI feel like you have to tell the stories that are important to you and so I didnâ€™t start out on a consious level and say I just want to tell gay and lesbian stories but the fact is that Iâ€™ve been fortunate enough that Iâ€™ve been able to go to the material that interests me the most. Iâ€™ve been able to choose the material that I work on and it just happens that a fairly high proportion of the material that really speaks to me, turns me on, makes me want to do back-breaking work for a year or 18 months or five years in order to help see it realized is work that has to do with telling our stories. Especially starting in the 90s, it was an area where there was a lack, there was an insufficiency of great stories about our lives and the way that we live so I was just real happy to be able to step in and come into contact with storytellers like Amastead Maupin, like Alan Ball, like Winnie Holtzman who were able to tell those stories.â€
2009 Outfest Legacy Awards by you.

Was great to chat with Kirsten Schaffer (pictured with Bruce Vilanch) who is due to have a baby late next month. She plans to take about a month off after the birth then will be back at work at the helm of Outfest.

While the summer film festival is the best-known Outfest endeavor, the Legacy Project in collaboration with the UCLA Film and Television Archive is among the most imoportant.

Said Kirsten: â€œThereâ€™s no one else doing this work so if we arenâ€™t working with UCLA and our community to collect our stories and put them in the archive, there will be no historic archive of the films that have been made in the last 100 years. If we donâ€™t know our history, we donâ€™t know who we are as a community and weâ€™re not leaving anything for future generations and thatâ€™s the goal of the project. To protect our history.â€

â€œWeâ€™re choosing films that we think have historic relevance and also have (restoration) need,â€ she said. â€œThere are some films that have been taken care of by studios so they donâ€™t need to be restored right now. There are other indepedent films that filmmakers have been storing under their beds or in their attics that really are in a state of disrepair and need a lot of work so weâ€™re choosing those types of films that need the work.â€

Also chatted with Bruce Vilanch on the red carpet and asked him to update me on what heâ€™s up to professionally: â€œIâ€™m peforming. Iâ€™m going all over the country and performing stuff â€“ my one-man extravaganza. And Iâ€™m writing a book. Itâ€™s my second but itâ€™s been 10 years between books. I actually have a deadline so I have to do it. Iâ€™m tryong to do it like a David Sedaris book where itâ€™s essays and some of them are funny and some of them are fictional and some of itâ€™s tell-all and some of itâ€™s tell-some.â€

I wondered if we were going to find out stuff about Bruce that we donâ€™t yet know.

I remind him that MacKenzie Phillips is getting a lot of buzz for her new book because of the revelations about her sexual relationship with her father.

â€œI know!â€ Bruce said. â€œI forgot to sleep with my father, what can I tell you? It was on my list of things to do but I never got around to it.â€

It was fun to chat up the handsome Alex Oâ€™Loughlin, the Australian actor who stars with Jennifer Lopez in Alan Poulâ€™s feature film directorial debut The Back-Up Plan.

Alex did not participate in the awards as far as being onstage but he wanted to be in the audience to support Alan who â€œhas become someone I love very much. Heâ€™s an incredible director. He is so smart, he is so well-read, so well-prepared, heâ€™s the consummate professional and a terrific guy. He means the world to me and itâ€™s a pleasure to be here tonight.â€

His new CBS series Three Rivers debuts on Sunday so be sure to read my interview with Alex about thar to be posted this weekend.

And finally, it was great to see Wilson Cruz for the second night in a row (he was honored at the Lamda Liberty Awards on Tuesday night) and he had a very personal reason for agreeing to be on the eveningâ€™s host committee and for showing up to support Alan Poul who he worked with on the memorable My So-Called Life.

â€œHe was my mentor, he was my big brother at the time,â€ Wilson said. â€œI was 19 years old and had just started my very first series and I knew that I wanted to come out publicly because I was playing a character who was very important to me and I thought it was important for people to know that the person who was playing him was also gay. Alan was the person who helped guide me through all of that. I didnâ€™t have a publicist and he made sure that I was taken care of and that I went to the right place (The Advocate) and that I did it in the right way. I donâ€™t know that I would have known how to go about it.â€