CV Independent
The Evening the Stars Come Out: Michael Childers’ ‘One Night Only’ Charity Extravaganza Returns to the McCallum Theatre
Written by Bonnie Gilgallon 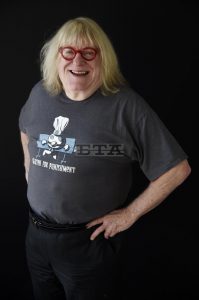 As I sat in Michael Childers’ gorgeous Rancho Mirage home—his award-winning photographs adorning the walls—he told me the story of how the hugely successful One Night Only show came to be.

The star-studded annual event, a benefit for Jewish Family Service of the Desert, will return to the McCallum Theatre Wednesday, April 25.

It all started nearly 13 years ago, Childers said, when he approached his dear friend Barbara Keller about putting on a variety show; it was an idea he’d had great success with in Santa Fe, N.M. The concept was simple: Assemble a cast of veteran cabaret performers and a great orchestra; choose crowd-pleasing musical numbers; and raise an impressive amount of money for a local charity. Keller spoke to her board of directors at Jewish Family Service—which provides psychological counseling, food, housing and other services to valley residents, regardless of religious affiliation.

A new Coachella Valley tradition was born: One Night Only premiered in the desert, with Childers’ buddy Lily Tomlin as the mistress of ceremonies. It was a smash, and now the event sells out every year.

It’s a large undertaking that takes a full nine months of planning. When deciding on the theme, Childers thinks about what he and audiences would like. Last year, it was the music of Jerry Herman; this year, it’s the classic music of Rodgers, Hammerstein and Hart. Jason Graae is back for his second year as director, with musical direction by Christopher Marlowe.

Childers and the director sit down with their rolodexes and choose the cast. Because of the show’s stellar reputation, many veteran cabaret performers clamor to be part of it—even though the performers are donating their time. However, being in the show has its perks: Childers says the stars are treated well, with glamorous parties and such—plus a few days in Palm Springs is very appealing if you’ve been dealing with months of chilly weather in New York.

Weary of the traffic and backstabbing in Los Angeles, Childers moved here in 1999 with his partner, Oscar-winning film director John Schlesinger (who later died of a stroke). Calling the valley “a wonderful, very philanthropic community,” Childers quickly became involved in the Palm Springs International Film Festival, and joined the board of the Palm Springs Art Museum.

A world-famous photographer, Childers currently has an Andy Warhol-themed show on display at the Palm Springs Art Museum. His work is also being featured in San Diego and will be on display at Yale University in the summer of 2019. A frequent lecturer on the subject, Childers said a great photographer is consistent and produces a lifetime of work, including iconic photographs.

When asked what makes a great live stage show, Childers’ answer was simple: Fit the show to your target audience, and keep it moving—don’t let it go on too long. This year’s One Night Only is slated to be a compact 90 minutes, with no intermission.

So what’s left on Childers’ bucket list? He’s working on an autobiography, called And I Have the Pictures to Prove It. Music education is one of Childers’ passions—and he’s very proud of One Night Only, calling it an iconic production in the desert.

One Night Only, a show benefiting Jewish Family Services, takes place at 6:30 p.m., Wednesday, April 25, at the McCallum Theatre, 73000 Fred Waring Drive, in Palm Desert. Tickets are $75 to $175, with a limited number of VIP tickets, including an after-party, available for $495. For tickets or more information, call 760-340-2787, or visit www.mccallumtheatre.com.