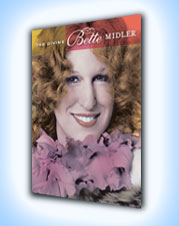 Captured On DVD, An Intimate And Extraordinary Look At Bette Midler’s Amazing Creative And Personal Journey, Including Bonus Features And Performances

LOS ANGELES, CA – Nothing about Bette Midler is ordinary. In a career that has spanned five decades, Bette has never failed to amuse, delight, provoke, inspire and entertain. Shout! Factory releases on DVD The Divine Bette Midler, a 90-minute biography that displays the intense drive, ambition and talent that enabled Bette to overcome turmoil and troubleand emerge as a superstar on record, television,film andthe concert stage. Originally produced for television and aired on A&E in 2004, The Divine Bette Midler includes exclusive interviews with Bette and longtime friends and collaborators such as Barry Manilow, Danny DeVito, Glenn Close, Bruce Vilanch, and more. This remarkable DVDis filled with rare footage from The Divine Miss M’s remarkable career: early TV appearances,scenes from a number of her blockbuster movies andmore than 17 song performances, including special moments from her hugely successful Kiss My Brass tour. Bonus features include complete musical performances, deleted scenes and expanded interviews. The Divine Bette Midler, available June 28th for $19.98 (suggested retail price), was written and directed by John Scheinfeld and was produced by LSL Productions (The Jack Paar Collection, Beautiful Dreamer: Brian Wilson and the Story of Smile) a company formed by television producers David Leaf, John Scheinfeld and Steve Ligerman.

The Divine Bette Midler follows Bette from her childhood in Hawaii through to her Kiss My Brass tour, Bette’s most recent triumph. The DVD weaves together a variety of interviews from Bette and those closest to her to present the complexity of her life and career in music, film, and television. Highlights include Barry Manilow’s discussion of his musical start as Bette’s piano player in the New York bath house shows, their Carnegie Hall performance which attracted the attention of famed Atlantic Records’ head Ahmet Ertegun (also interviewed for the DVD), Bette’s heartfelt, Emmy® winning performance of Sinatra’s “One For My Baby” on Johnny Carson’s last show, clips and discussion from her fellow music and film stars and much more. Each perspective offered in The Divine Bette Midler reveals another dimension of Bette’s personal and emotional journey and her multi-faceted career and philanthropic ambitions.

DVD bonus features include extended interviews, deleted scenes and Midler’s complete musical performances of “From A Distance” (from the 1997 Diva Las Vegas TV special) and “Do You Want To Dance” (from the 1977 Ol’ Red Hair Is Back TV special). The Divine Bette Midler is truly a must for any fan.