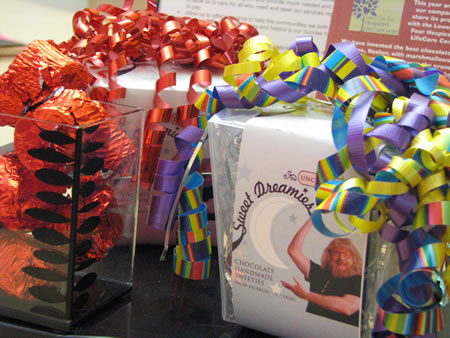 WILMINGTON, NC â€“ Four years ago if you had asked local businesswoman Elle Puritz how she would be making a living now, she would not have said making candy. Little did she know that after a twelve-foot fall from a mountain and subsequent stroke on June 29, 2009, she would be forced into early retirement from her thriving printing business.

Living by herself in an apartment at The Woods at Holly Tree and armed with a vivid imagination and tireless work ethic, Puritz recently launched Uncle Bruceâ€™s Sweet Dreamies, a line of home-made candy to benefit Lower Cape Fear Hospice & LifeCareCenter. The chocolate and marshmallow candies are marketed with the name and likeness of world-renowned comedian Bruce Vilanch, who is the godfather of Puritzâ€™s two sons.

Sweet Dreamies are handmade chocolate and marshmallow treats with a secret crunch. â€œMy mystery ingredient is so hard to place, I have prizes for anyone who can guess correctly,â€ said Puritz. The allergen nut-free, kosher candies will be sold in retail shops and businesses in Wilmington, such as Mindy & Angieâ€™s Fine Paper, Pine Valley Market, Bangz Hair Salon, Center for Integrated Healthcare, Bodies In Balance Physical Therapy, and Sawgrass Salon & Spa. Puritz said she hopes to have her candies available in ten to fifteen local businesses by the end of the year and into 2010.

The chocolates are attractively packaged in 10-ounce fancy, Chinese takeout gift boxes and sell for $12 each in 2009. To order, simply fill out the order form at participating retailers, where there are samples to try, fax to the number provided and wait for your chocolates to be hand delivered.

Prior to starting Uncle Bruceâ€™s Sweet Dreamies, Puritz founded PrintWorks by Elle on Wrightsville Avenue and was the personal assistant to film and TV actress Linda Lavin for nine years. Before her accident, she made the chocolates on the side as a way to help raise funds for charities.