Horror Society
SURGE OF POWER: REVENGE OF THE SEQUEL Available Now On Blu-Ray, DVD And VOD
Cinema’s First Out Gay Superhero Faces His Greatest Challenge
by BlacktoothMar 20, 2018, 10:14 am 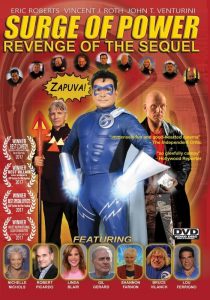 Surge’s nemesis, the Metal Master, is out of jail and trying to reconcile with his estranged parents (Blair, Gerard) and tempted to continue a life of crime by Augur (Roberts), archnemesis of the wise Omen (Nichols, Picardo).  Augur sends Metal Master to Las Vegas for mysterious crystals.  Needing more crime fighting help, Surge activates the artificial intelligence in the Surgemobile (Vilanch, Farnon). Augur emerges from the shadows back in Big City, causing Omen to step into the fray, which alerts The Council, a supervillain cabal bent on world domination.  Facing more enemies than ever before, Surge must do whatever it takes to save mankind.

Order Surge of Power: Revenge of the Sequel on Blu-ray (Amazon)