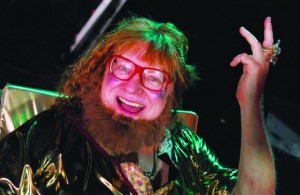 The world contains quite a few people who seem to always be playing to an invisible camera. But Bruce Vilanch is one of those truly rare people who is always cracking jokes off the top of his head that are actually funny.
Vilanch is known for his work both behind and in front of the camera. The two-time Emmy winner has written material for many of America’s top comedians, but is probably best known to the public for his time as a regular on Hollywood Squares. Vilanch has been head writer for the Academy Awards since 2000. In 1999, he was the subject of a feature-length documentary, Get Bruce!, about his life as Hollywood’s most sought-after humor writer.

It’s easy to see why Vilanch is such a valuable commodity in Hollywood. In person, he’s endearingly clever in a down-to-earth way, loves playfully entertaining everyone around him, and seems unable to stop saying things that are genuinely hilarious.

Vilanch was in Chicago for the shooting of the new film Scrooge & Marley, a contemporary retelling of the classic Dicken’s tale, A Christmas Carol, “with a gay twist,” that will premiere during this year’s holiday season. In a casting stroke of genius, Vilanch plays the comic/tragic character Fezziwig in the film.

Though he already had on his Fezziwig wig for our interview, the makeup department had not yet glued on his Fezzi-beard. He stroked the strawberry blonde locks of his wig lovingly, and told me, “My old hair—it’s come back to visit. It’s been living in a condo in Boca Raton, and now it’s decided to come out of retirement.” In fact, his real hair today, with its strawberry blonde color and shoulder-length Prince Valiant styling, looked rather similar to his Fezzi-wig—just a bit less bushy.

Not done hamming it up, Vilanch began to croon to his wig: “‘Hello my old friend … ‘ I feel like Sweeney Todd,” he quipped. “‘This is my burden … .’ Soon there will be a beard to complete the picture. I will look like a nightmare version of myself from the Seventies. I can’t wait!”

In Dickens’ original Christmas Carol, Fezziwig is young Scrooge and Marley’s boss. He’s a generous, ethical businessman who treats his employees like family, cares about their welfare, and throws lively holiday parties for all. Sadly, he is forced to sell his business to avaricious corporate interests who care nothing about worker morale. Scrooge and Marley, grown more callous over time, side with the heartless new owners.

“I play Fezziwig, who you’ll remember from Dickens,” Vilanch said. “But this is a different kind of Fezziwig. He’s a guy who owns a disco in the Seventies and he’s Auntie Mame—Rosalind Russell and Auntie Mame.” Vilanch threw back his head, causing his wig to flounce. “He’s all, ‘Oh how droll, how vivid!’ He’s a pretty fabulous character, and he brings young Scrooge and Marley in [to his business] and of course they do him dirt—you know the story. And then we see his downfall. But then there’s a resurrection. It’s very biblical.”

Though Scrooge & Marley is a modern, gay-themed retelling of A Christmas Carol, Vilanch’s character follows the traditional Dickensian arc. “He’s a jolly old soul who gets caught up in his vices and gets caught up in their chicanery. And eventually he’s something they [the spirits] show Scrooge, to show what a bad guy Scrooge has been through the years. So Fezziwig’s kind of a poster child for excess. But at the same time, he’s brought down by the hand of somebody who is genuinely sinister. And he’s not. And I like him.”

Dickens’ Fezziwig symbolized the end of an era he knew well, the Industrial Revolution. Dickens’ saw it as a time when small businessmen and local industries like Fezziwig’s were disappearing, swept away by more ruthlessly profiteering business practices and cutthroat corporations. The Fezziwig in Scrooge & Marley also symbolizes the end of an era: the pre-AIDS gay culture.

“Fezziwig is the end of that party that was going on in the gay community in the Seventies, that was ended by the AIDS epidemic,” said Vilanch. “Suddenly everything got very serious and everything that we were told would happen because of what we were doing suddenly happened—and not because of what we were doing. It was totally coincidental. It was the end of some kind of a party that had been going on since I think Stonewall. There was a great deal of joy about liberation and getting a movement going and all that, and that came crashing down when people began dying. And ironically enough, that movement, because of the epidemic, became a real genuine political movement, which is as forceful today as it can be.”

Vilanch was living in Chicago in 1970, working at the Chicago Tribune, when he met Bette Midler. Midler hired him to write jokes for her, marking the start of a successful collaboration that has lasted through the years. After moving to L.A., Vilanch began writing material for other famous comics as well, including Joan Rivers, Richard Pryor, and Lily Tomlin, and for television shows like ABC’s original Donny and Marie Show and The Brady Bunch. Vilanch heard about the Scrooge & Marley project from his friend, the film’s co-director and co-writer, Richard Knight.

“I had done his radio show when I was in Chicago doing Hairspray, and we’ve been friendly ever since. And he talked about making this strange gay take on A Christmas Carol. When you consider Christmas Carol’s been done every other way—I mean, I’m waiting for the al-Qaeda version, that’s all that has been missed—so I thought, how could I not be a part of it? It’s so original, so unusual.”

Vilanch also considered a gay version of A Christmas Carol in it’s wider cultural context. “I think that the reason to do a gay version of anything is to show that we’re all basically the same under the skin. That the humanity is the same. We just have wildly different cultural perspectives and ways of expressing ourselves. But it’s the humanity of it all that’s important,” he observed.

“And gay community, and gay culture, for want of a better word, is just so much fun. It’s so festive and everything-is-in-quotes and over-the-top exaggerated, because it’s a culture that had to live under the thumb of a straight culture for years, so its take on things comes from being oppressed. And that’s always funny,” said Vilanch. “I mean, I’m Jewish, too, and we have that in common: we were oppressed for five thousand years and that’s why so many funny people are Jews. When you’re at the bottom, you kind of have to look up and laugh, because you don’t see the sun a lot.” Vilanch paused, then added warmly, “And eventually, you do.”