Mister D:Â Mister Vilanch and Ms. WLOSZCZYNA had nothing to do with the artwork I chose. But if you’re interested in where this funny, yet “so true to life it’s scary,” little movie spoof came from then check outÂ Towerload. I don’t even think it originated there, but that’s where I first saw it along with some other Brokeback spoofs.Â

Ennis, anyone?
It’s the new hip
By SUSAN WLOSZCZYNA USA 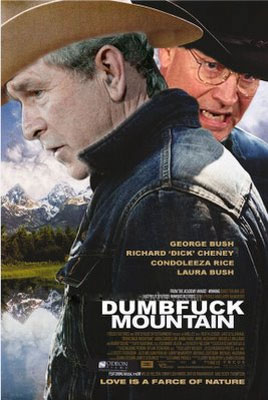 Against all odds, a western romance about two men, “Brokeback Mountain,” has corralled the cultural zeitgeist, making it safe for our national funny bone to come out of the closet.

Just as Ennis can’t forsake secret squeeze Jack in the critically praised love story, the avalanche of jokes, parodies and quips inspired by the winner of four Golden Globes shows no signs of abating almost seven weeks after its opening in theaters.

As the film about an on-and-off affair over two decades between a pair of sheep wranglers continues its cross-country drive (the number of screens almost doubled last weekend to 1,190) on the way to predicted Oscar glory, mirth meisters just can’t quit the “Brokeback” wisecrack habit.

On the Dec. 13 edition of CBS’ “Late Show,” Letterman’s “Top 10 Signs You Are a Gay Cowboy” listed this chuckle at No. 5: “Native Americans refer to you as Dances With Men.”

Last month, when TV writers inquired about any “Idol” rule changes in light of Paula Abdul’s alleged fraternizing with a contestant, Randy Jackson joked he could no longer touch fellow judge Simon Cowell, imploring, “How do I quit you, Simon?”

Midway through designer Valentino’s fashion show last month in Milan, two cowboy models in denim, cowboy hats and leather jackets strolled down the runway, hand in hand. Hip comic strip “The Boondocks,” which dedicated a week’s worth of panels to the movie in December, has inaugurated a bold new adjective: brokeback. As in, “Your man-purse is brokeback.”

So what’s so funny? “It’s irresistible,” says Bruce Vilanch, gay actor (Broadway’s “Hairspray”) and veteran comedy writer for the annual Oscar telecast who will be supplying host Jon Stewart with some choice “Brokeback” comebacks. “Not only is it the first mainstream gay love story in a long time, it’s between two cowboys. What greater American icons are there than gay men and cowboys? When you mix the two, it’s a stereotype too good to pass by.”

The fact that late-night TV chatters can’t help but rib the low-budget art film (last month, Jay Leno dragged out a boa-draped equine mannequin modeling a “gay cowboy saddle,” complete with hair-dryer holster) has pushed “Brokeback” from arthouse enclaves into the mid-America mainstream. “At first, the reaction was, ‘Oh, they messed around with John Wayne,’ ” Vilanch says. “Now we are comfortable with it.”

Lesbian comic Kate Clinton understands the temptation to mock a tragic tale of forbidden passion that moves audiences to tears but rarely giggle fits. “It’s such a primal American archetype. It’s the westward ho â€” and we all know her. To go against such an icon makes it funnier and more transgressive.” Now it’s a must-see for curious hetero audiences, too, and not just coastal city slickers but folks in Little Rock and Fort Worth. “They want to be homo-hip and know what is going on,” Clinton says.

No one is laughing harder than “Brokeback” director Ang Lee and producer James Schamus, who have been hearing the jokes ever since production on the film was announced. “It’s essentially flattering,” Schamus says. Beyond the box-office boost, such attention also bodes well for the movie’s Oscar chances in a year where heavy issue-centric contenders reign. Heard any good “Munich” jokes lately? Didn’t think so.

As Vilanch says of “Brokeback,” “It’s not the highest grosser, but it has tremendous visibility.” Not everyone is amused, however, especially conservative commentators and groups. And there’s Utah Jazz owner Larry Miller, who refused to show “Brokeback Mountain” at his theater complex in a Salt Lake City suburb. “When Larry Miller pulled it, he won the Oscar for it,” Vilanch says. “It didn’t have any effect on the film and only made it stronger.”