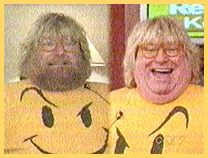 (Thanks for the pics Darrell)

It’ll be a close shave for Bruce Vilanch today when the actor loses his bushy blond beard on Live with Regis and Kelly (10 a.m., WBAL, Channel 11). The public shearing is part of Vilanch’s preparation to play Bawlamer matriarch Edna Turnblad in the road company of the musical Hairspray, which launches its national tour at the Mechanic Theatre Sept. 9-21.

The rest of the cast has also been announced. The musical about Tracy Turnblad, a tubby teen who rises to local stardom will, appropriately, star a newcomer – Carly Jibson, a 19-year-old from Michigan, in her professional debut. Tracy’s dad, Wilbur, will be played by Todd Susman, an actor with extensive TV and movie credits.

Meanwhile, individual tickets to Hairspray look as if they’ll be rarer than Vilanch’s facial hair. Marks Chowning, executive director of Clear Channel Entertainment, Baltimore, says, “With subscription and group sales continuing so briskly, it is doubtful there will be single tickets for sale.”