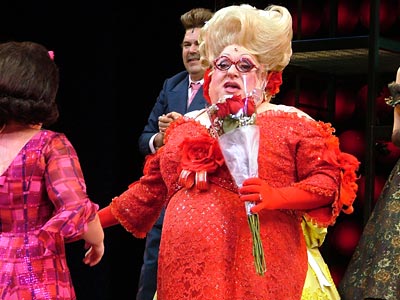 Bruce Vilanch, who starred as Edna Turnblad in “Hairspray” on October 5th, 2004 played his last performance in the tuner on September 4th. Vilanch took over the role from Michael McKean, after touring with the show around the country. BroadwayWorld was there as Bruce took his final bows amongst several of the show’s creators including Jack O’Brien, Mark O’Donnell, Marc Shaiman, Scott Wittman and Margo Lion. Marc and Scott continued their “Krispy Kreme” tradition by supplying 2,000 donuts for cast and audience members in attendance. What a sweet exit!

Stepping into the role of Edna next is John Pinette with Stephen DeRosa joining the company as Wilbur. Both Pinette and DeRosa recently left the National tour.

Hairspray takes audiences to 1962 Baltimore, where 16-year old Tracy Turnbald, a big girl with a big heart and even bigger hair has only one passion, to dance. After winning a spot on the local TV dance program she becomes an irrepressible teen celebrity, but can a plus-size trendsetter vanquish the program’s reigning princess, win the heart of the boy she loves and integrate a television show without denting her ‘do? Only in Hairspray!

Based on the New Line Cinema film written and directed by John Waters, the original two-hour and forty-minute production will be modified to run ninety minutes, without an intermission at Luxor Las Vegas. In addition to its eight Tony Awards, which include Best Book, Best Score and Best Director, among others, the musical won a Grammy for Best Musical Show Album and five Outer Critics Circle Awards.