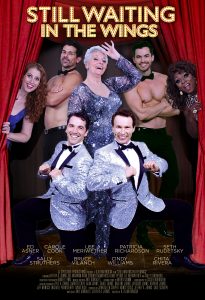 Still Waiting follows the trials and triumphs of a ragtag team of actors waiting tables in Times Square at The Cafe’ Broadway. While dreaming of the glow of the footlights next door, the reality of slinging hash under florescent lights mixes sweet aspirations with bitter drama. The performers of New York City are as varied as it’s inhabitants: the diva, the theatre queen, the soap star, and even a couple of strippers thrown in for good measure! There’s no people like show people (Thank God), and there’s no telling what can happen when they’re pitted against each other.

We are so excited to re-assemble the cast and songwriting team of Waiting In The Wings: The Musical and bring to you the sequel, Still Waiting In The Wings. We have many delightful cameos joining the cast and want to make sure we bring you the same quality production as our initial film. While $3,000 isn’t a high goal, this is the amount we absolutely need to pay for post production services. While we could cut corners, we need to make the highest quality film to show indy movie musicals can still be made and look like a million dollars!

QCinema: Fort Worth – Best of the Festival