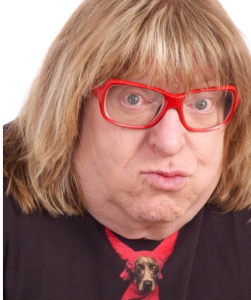 Chicago, IL — The holiday season moves into high gear on Saturday, Dec. 6, and Sunday, Dec. 7, when the Chicago holiday film Scrooge & Marley returns to the Music Box Theatre, 3733 N. Southport Ave., a little more than two years from the date of its red-carpet premiere at the historic venue in 2012. Both screenings are at noon, for $10 each.

The movie, which was entirely shot in Chicago, is a modern-day, gay variation on Charles Dickens’ classic A Christmas Carol. These matinee screenings include a festive pre-show. The swingin’ female a cappella caroling trio The Merry Janes will lead a holiday sing-a-long preceding the Dec. 6 matinee.

Audiences of all persuasions have embraced Scrooge & Marley, which stars David Pevsner as Scrooge, Tim Kazurinsky as Marley’s Ghost, Rusty Schwimmer, Megan Cavanagh, Ronnie Kroell, and David Moretti, features multiple Emmy Award-winner Bruce Vilanch as Fezziwig, and is narrated by two-time Tony Award-winner Judith Light. Members of the cast and crew will be on hand for both screenings. Advance tickets are available at www.musicboxtheatre.com.

The festive spirit continues on Sunday, Dec. 14, when the Oak Park chapter of PFLAG and OPALGA ( Oak Park Lesbian and Gay Association ) co-sponsor a screening of the film at the Oak Park Public Library, 834 Lake St. The free 2 p.m. screening will be followed by an after-party that will include a festive carol sing-a-long and refreshments. Members of the film’s creative team will attend the screening and party. http://gopride.com/Zb20/

The Chicago Public Library will round out the season when it hosts two screenings of the film, at 6 p.m. on Monday, Dec. 15, at the Humboldt Park branch, 1605 N. Troy St.; and Monday, Dec. 22, at the Bezazian branch, 1226 W. Ainslie St. Members of the film’s creative team will attend the screening.