*Vilanch and other stars to walk red carpet Thursday, Nov. 29* 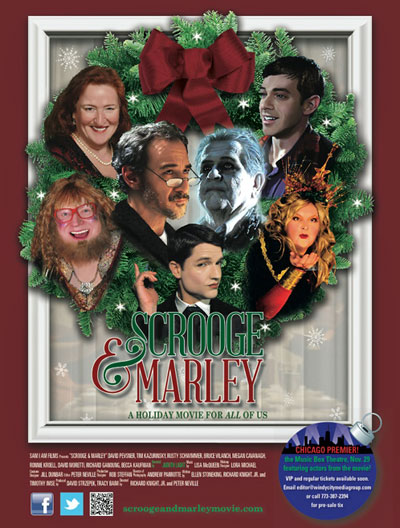 The film will also screen in at least a dozen cities nationwide this holiday season, with a DVD and soundtrack slated for December release.

The Chicago premiere run will kick off with a gala opening night celebration featuring most of the stars of the film. There is a pre-VIP event at Freda’s Restaurant at 5 p.m., red carpet at the Music Box at 6:30 p.m., with the film screening at 7 p.m., followed by a Q&A with cast and crew. A post screening VIP after-party will be held at D’Agostino’s on Addison. Philanthropist Michael Leppen is underwriting the opening night events. Tickets are now on sale at: http://www.musicboxtheatre.com/events/scroogeandmarley .

The dates and times for the Music Box shows in Chicago:

Some of the Music Box shows will feature additional cast appearances, Q&As and even musical performances. More details will be available soon. See http://www.scroogeandmarleymovie.com for additional screening information.

“Scrooge & Marley” is a modern-day variation on Charles Dickens’ “A Christmas Carol.”  Recounted from a gay sensibility, with heart, comedy and music, the magic of Dickens’ timeless tale of a man’s redemption at the holidays—thanks to the help of three ghostly spirits—comes alive from a fresh perspective that will appeal to audiences of every persuasion. The film is based on an original script by Ellen Stoneking, Knight and Timothy Imse. It was directed by Knight and Peter Neville. Producers of the film are Tracy Baim (“Hannah Free”) and David Strzepek (“Foodgasm”), joined by several co-producers (Knight, Neville, Stoneking, Kroell, and Moretti) and noteworthy crew.

Following are the upcoming screenings of the movie (more to be added):

More screenings to be added in additional cities this December.