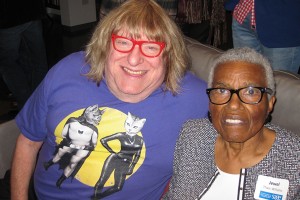 LOS ANGELES — The fundraiser for SAGE USA March 4 in the Hollywood Hills felt like a reunion, a coming together of a generation of LGBT people with shared memories and a desire to confront aging, an issue, SAGE Board Development chair Bill Weinberger said, he heretofore had avoided thinking about. Honorees Jewel Thais-Williams and Bruce Vilanch, however, exemplify how LGBT people can age as respected elders with grace, continued activism, and humor.

Weinberger introduced Phill Wilson, founder of the Black AIDS Institute, whom he has known since the early 1980s. Shortly after, Wilson discovered he was HIV positive. He noted that while “many of us were dealing with whether we would survive or not, SAGE has always believed we would.” Wilson shared how Thais-Williams bravely opened Jewel’s Catch One Disco as a refuge for LGBT people desperate for a place where they could be themselves.

“Jewel has been a leader, a hero, and a visionary and an advocate for a long, long time,” Wilson said. “Jewel was one of those ‘bridge’ people,” linking the LGBT African-American community to organizations such as AIDS Project Los Angeles and her alma mater, UCLA. You always speak up, whether you’re afraid or not.”

Thais-Williams joked that she was honored to be honored, having spent the last 42 years at Catch One “partying,” adding that she will turn 78 in a couple of months. “To be of service to my community has been a great joy,” she said. “But there is still a lot of work to do. Remember to always reach out to those in need.”

“There has never been a more important time to come together,” SAGE CEO Michael Adams told the diverse crowd of SAGE board members, staffers and supporters at the elegant home of James Frost and William Yi. “We are living in very challenging times,” a notion received with a knowing chuckle for its understatement.

A civilization is historically measured by how it cares and supports its children and most vulnerable and how it supports its elders, Adams said, not just the “right kind of elders….We owe it to our elders, the pioneers who paved the way for the equality we celebrate today….We need the wisdom of our pioneers, our elders.”

SAGE (Services and Advocacy for GLBT Elders) was founded in 1978 in Greenwich Village by two activists and a handful of supporters to provide a visiting program and drop-in center for LGBT seniors. It is now a national organization with 30 SAGENet affiliates in 20 states and D.C., and is partnering with the Williams Institute at UCLA School of Law. Adams also had kind words for the LA LGBT Center and its programs caring for LGBT seniors.

Demographic estimates predict that there will be 6 million LGBT people age 65 years or over in America by 2030. That sets the stage for a potentially disastrous future since, as SAGE notes, LGBT seniors are “twice as likely to be single, twice as likely to live alone, and four times more likely to be without children than their heterosexual peers.”  And, Adam said, facilities that take care of the aging population are “woefully unprepared” to take care of LGBT seniors who fear having to go back in the closet in order to get care and treatment without discrimination.

In introducing comedic writer/actor Bruce Vilanch, SAGE Board co-chair Elizabeth Schwartz—whose co-chair is former LA-based board activist Kevin Williams—said Vilanch’s appearances on “Hollywood Squares” were “instrumental in shaping gay images.” Watching him, “we didn’t have to speculate obsessively” about whether he was gay “as I did over Kristy McNichol.”  She was also grateful that he was also out about being chubby. Vilanch, she said, has a “tireless dedication to the LGBT community.”

In accepting the handsomely shaped glass award, the legendary Oscar writer said that when he was told he was being honored by SAGE, his first thought was: “You have the wrong envelope,” referring to the Best Picture mishap at the Academy Awards.

However, a recent interview with a young journalist underscored that he is now arcing “into my dotage.” The young gay man had no idea who Ted Mack was, though “Ted Mack’s Amateur Hour,” the variety-show precursor to shows like “American Idol,” launched the careers of such future celebrities as Pat Boone and Ann-Margret.  The young man sat stone faced at the mention of her name.

“When queens don’t know who Ann-Margret is, we’re in trouble,” Vilanch said to an uproar of laughter.

“Senior gays are not venerated,” he said. “But we are valued because we can pick up the check or write it.”

As to his decision to be openly gay at a time when being out was a brave decision, Vilanch noted that he worked in the more accepting entertainment industry. But early on, he worked as a journalist writing features for the Chicago Tribune and tried to get gay stories into the paper. Vilanch cited a quote that stuck with him: “A faggot is a homosexual gentleman who just left the room.” He determined to be “the faggot who stayed in the room.”

LGBT progress is result of taking action. “We did the bravest thing—we came out and that changed everything,” Vilanch said. But the LGBT community cannot rely on help from outside. “We have to do it for ourselves….[and] we’re not done yet.”

SAGE CEO Michael Adams also announced the launch of a new initiative in conjunction with AARP—SAGETable— to build “intergenerational connections in the LGBT community” by “breaking bread with your LGBT family on May 18. Visit sagetable.org.