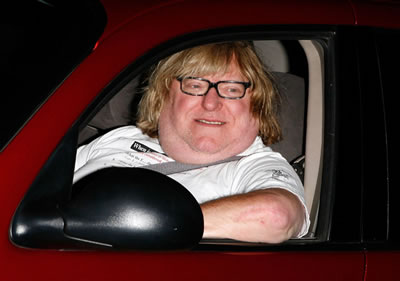 Ten naked men in a Rockettes-style high-kick line. Imagine all the flopping around. Actually, you don’t need to imagine it. Check out Naked Boys Singing, and you can see exactly what it looks like. This fast-paced and intermittently witty stage revue, a crowd pleaser that has played in small theaters in liberal-minded cities for almost 10 years, has been committed to film faithfully if somewhat artlessly. Shot in an LA theater from right behind the live audience’s collective head, it’s as if you’re sitting in row M, sort of.

Interspersed with all the dick jokes and gay play are a few touching ballads. Vincent Zamora and Ethan Le Phong sing beautifully on “Window to Window,” a duet about a secret longing for the guy across the street, and Jaymes Hodges sings “Kris Look What You Missed” about a love gone wrong.

At times, the camera brings us on stage for a few alternate points of view, but the muddy video quality, weak lighting, and lip synching make it less than a total theatrical immersion. The live audience seems to be having a great time, but they’re in a room with 10 naked men. We’re at a distance and can’t enjoy the same frisson. In fact, the whole exercise can’t help but feel a bit zoological, as if we’re watching exotic specimens on display.

Still, many of the lyrics are clever (you can easily sense the touch of writer Bruce Vilanch, king of the gay double entendre), and there are plenty of laughs to be had. And you have to hand it to those 10 guys. They show no signs of performance anxiety at all.

Hands up: Who wants to get a pizza?