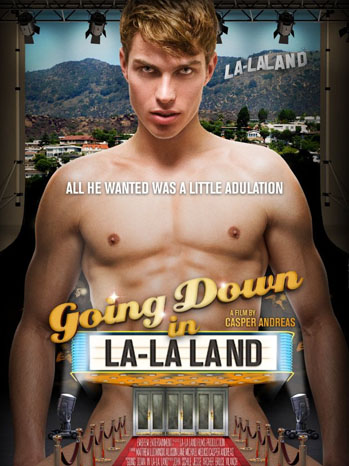 With a title like Going Down in La-La Land, it doesnâ€™t seem likely that Casper Andreasâ€™ film is going to be marked by restraint. But restrained it is, at least compared to such previous gay-themed efforts by the filmmaker as Slutty Summer and The Big Gay Musical. While this tale of a young man who finds himself shocked — shocked! — to discover that sleaze is prevalent in Hollywood doesnâ€™t exactly break any new dramatic ground, it, um, goes down easily enough.
The protagonist of this latest variation on an all-too-familiar theme is Adam (Matthew Ludwinski), a young actor has just arrived in L.A. to pursue his dreams. Rooming with his best friend Candy (Allison Lane) — also an aspiring actor, though one more interested in landing a rich man than a good part — he discovers that, despite his hunky good looks and all-American appeal, the town isnâ€™t immediately ready to fall at his feet.

Veering uneasily at times into melodrama — especially with a subplot involving a drug-addicted co-worker (played by director Andreas) who attacks Adam with a knife — La-La Land is more grim than its title would suggest. But it does depict its West Hollywood milieu with a comic, insiderâ€™s knowingness, and the cameo appearances by such figures as Bruce Vilanch, comedian Judy Tenuta and actor Alec Mapa (playing himself, dishing out bitchy insults about fellow patrons at a bar) only add to the atmosphere.

Ludwinski, who frequently bares his gym-toned body, is certainly up to the physical demands of his role. And heâ€™s appealing enough to make you cheer for his character in the film’s fairy tale-style ending.