It’s a story, of a lovely lady … Florence Henderson gave audiences in Los Angele’s Catalina Club an up close and “Honest” night of entertainment with “All The Lives Of Me,” under the musical direction of Broadway composer and Emmy Award winner Glen Roven. 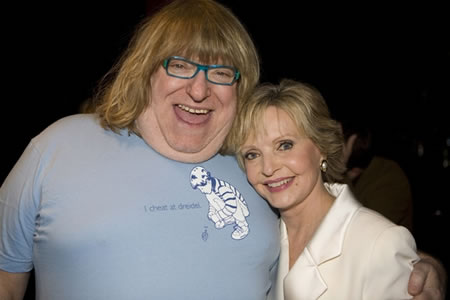 Friends and colleagues included Carol Burnett, Donna Mills, Robert Wagner, Rita McKenzie, Mitzi Gaynor, Norm Crosby, and Bruce Vilanch (who is credited as a co writer of the program) among others, were on hand as Florence Henderson opened with a hysterically funny number entitled “Lifted,” before treating audiences to a look at all of her lives. She prefaced that she didnt mean lives like Shirley MacLaine has lives, but rather as a young girl growing up in KY as the youngest of ten children. An honest look at life in a poor, but loving share croppers family. Giving just a sample of the fifty songs that were part of her repertoire by the age of two, she vocally embraced her audience with touching renditions of songs such as “I Am Your Child” and “My Own Kentucky Home.” She spoke of singing for food at the grocery store, discovering a fathers love of moonshine he made himself and showing how a depression wise mother had her “pass the hat,” receiving an unplanned financial response from the audience as members waved bills to get her attention, while others ran forward to include their contributions. A moved Miss Henderson offered to donate the money, along with a check of her own, to her favorite charity.

Segueing into her second life as a Broadway Baby, she took her now devoted audience through memories of working with legends like Noel Coward, Richard Rogers and Oscar Hammerstein singing “Oh What a Beautiful Morning,” “Wonderful Guy,” as well as another honest look at life in the last road company of Oklahoma in the lead role of Laurie. By 19 she was a bona fide star on the Broadway stage, an experience she related with a song entitled “Eight Shows a Week.”

Her next life, of course, was as America’s favorite Mom in The Brady Bunch. A life she fully embraces … as if she had a choice … and giving a very honest depiction of working on a top rated TV show in an icon making role like Carol Brady. Tears were seen in the eyes of the audience as she dedicated “One” to her former TV hubby, Robert Reed, “A man of incredible talent and who treated the entire cast as his own family.”

Florence then revealed the more private and greatest of her lives, as she openly discussing being a real mother of four wonderful children, (Barbara, Joseph, Robert and Elizabeth) with songs like “Me And My Babies” and included an honest look at putting the disappointments of divorce to her first husband behind her and dedicating “My Heart Stood Still” to second husband, the man she shared a blessed 20 years of marriage before he passed away some 6 years ago.

A highlight of the evening for the patrons was the answering of Q&A questions, which were both submitted in advance and called out from the crowd. Although most dealt with her career in Broadway hits such as “Sound of Music” and “South Pacific,” as well as being the first “Today Show Girl” (quick to point out you wouldnt call Meredith Vieira a girl now a days) and being the first woman to host the Tonight Show. However, it was a blushing Miss Henderson who, again honestly, responded to personal inquiries regarding career choices, disappointments and love life including an unusually request as to “whether Sam the butcher ever delivered meat to Mrs. Brady,” to which an audience member yelled out “Remember, you promised to be honest.” The answer? No.

Miss Henderson later remarked that people have asked me for years to write a book, but Im not ready to do that just yet, so this is … for now anyway … her book on stage. Giving her fans an “Honest” peak into her life, the best way she knows how – in song.