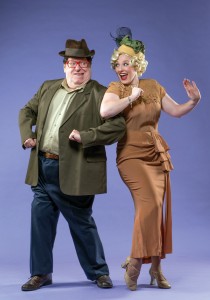 Crafted for comedy king Bert Lahr and brassy belter Ethel Merman, Broadway’s 1939 hit “Du Barry Was a Lady” gets a bright new reading in a revival by 42nd Street Moon.
It’s a silly but saucy trifle about a schlub in love with a showgirl who, of course, loves someone else. The schlub wins the lottery and gets drugged into a parallel dream world that places him and his anachronistic cronies in courtly Versailles.

Award winning-writer, stand-up comic and frequent actor Bruce Vilanch steps in for Lahr (and Red Skelton in the 1943 film) in the dual role of Louie/King Louis.

Vilanch clearly relishes an audience, which makes his performing joyful and engaging without ever mugging. He’s also one of those graceful big men whose stage agility looks easy and comfortable.

He definitely knows his way around an improv, so only careful study of the script will reveal whether or not he’s resisting the urge to polish the 75-year-old work of book writers Herbert Fields and Buddy DeSylva.

There’s no polishing needed for the Cole Porter score, which includes “Well, Did You Evah!” and “Friendship” (interpolated into “Anything Goes” in 1962 and evah after).

As May/Du Barry, Ashley Rae Little commands the stage in the latter. There and in production numbers like “Give Him the Oo-la-la” and “Katie Went to Haiti,” her full-throated, sassy performance nods to the power of what Merman must have been, while radiating a wonderfully fresh feel. Little is a musical comedy natural and she’s clearly got a firm bead on the wised-up dame who still longs for true love.

Nicole Renée Chapman and Nathaniel Rothrock fight nice as the “juvenile” leads and kick up a cloud of stardust in the substantial dance sequences. Other standouts include Jack Mosbacher’s suave and silver-voiced boy toy for Little, and Ryan Drummond, who can steal a scene just by shrugging his shoulders in rhythm.

Pulling duty as director and choreographer, Zack Thomas Wilde shows a deft hand for this kind of material and specifically raises the bar for dance deployment in Moon productions, from his elaborate full-company numbers to cleverly tapped scene changes.

Music director Ben Prince provides lively piano support and nicely blends the group vocal efforts. Costumes by Felicia Lilienthal are playful in the court sequences and Jennifer Veres strips out the proscenium to create a grand central playing area. Racy for it’s time but tame today, this “Du Barry” may want to be a lady, but deep down she’s really just a good time gal!

Du Barry Was a Lady