This time, the jokes are mainly on him
Steven Winn, Chronicle Arts and Culture Critic
Thursday, November 10, 2005 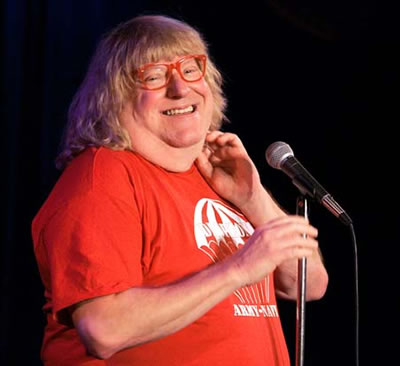 Whenever anyone in Hollywood has said something funny over the past 25 years, there’s a pretty fair chance that Bruce Vilanch wrote it. There’s also a good chance he was rolling his merry eyes, half in delight and half in mock-dismay, at his facility.

When the call came to write for Donny and Marie Osmond, Vilanch knew just where he was: “Hello, bottom,” as he puts it with a buoyant grin. The only thing sillier than a career in show business, Vilanch seems to believe, would be taking it seriously.

Trailing a resume that includes stints for Bette Midler, Richard Pryor, Paul Lynde, George Carlin, assorted Academy Awards show hosts and Miss Idaho at the Miss Universe Pageant, Vilanch landed at the Empire Plush Room on Tuesday with a genial, disheveled, cheerfully uncensored recollection of his life in the business. In a 100-minute ramble that begins with a crack about Harriet Miers and ends with a resplendent image of a flatulent Tallulah Bankhead letting loose in a summer stock melodrama, “Bruce Vilanch: Almost Famous” is full-disclosure entertainment. It can be pretty loose and shaggy, but refreshingly untainted by pretense.

Vilanch bumbles from topic to topic, sings a little, forgets lyrics and confesses, only semi-disingenuously, “As you can see, I have no act. I write everybody else’s act.”

That’s about it for introspection. And that’s enough. Vilanch, who may be best known as the bearded gay behemoth on “Hollywood Squares” (1998-2002) — now he’s clean-shaven and somewhat slimmed down — is at his best as a total-recall anecdotalist. He was there — backstage at the Oscars, on the road with Cher, on tour and on Broadway as Edna Turnblad in “Hairspray,” in the New Jersey and Florida nightclubs he visited as a child. He remembers every detail, the name of every star’s gofer, every Bloody Mary “the size of Cleveland” he downed during his days with the “The Donny and Marie Show” in the 1970s, every drunk he saw sprawled outside the Golden Gate Theatre during his “Hairspray” run here.

When he gets rolling, Vilanch can draw on a seemingly bottomless tank. He whirrs along on Ann Miller and her wigs, does a full Sophie Tucker routine and dredges up Ann B. Davis (the “Brady Bunch” maid) and her coven of Christian/lesbian/car mechanic friends. Wearing a bright red T-shirt, his hands planted on his hips or toying playfully with his Prince Valiant hair, Vilanch is plainly enjoying himself onstage. He plunks down on a stool, bulldozes his way through the “tits-and-ass” number (“Dance: Ten; Looks: Three”) from “A Chorus Line” and never stops smiling.

“Can I tell you a really rude Paul Lynde story?” he asks with an innocent twinkle. That’s after he’s just told one, drawing gasps, about what Lynde once said to the mother of a bawling baby on an airplane.

The show’s apparent artlessness is something of an illusion. There’s more structure to “Almost Famous” than meets the eye. After filling us in on his latest project — a forthcoming run on VH1’s weight-loss reality show, “Celebrity Fit Club” — Vilanch shuttles back through his career. He recalls his work as a chubby child model for Lane Bryant clothing and his high school fellow spirits — “the ones picked last for volleyball.”

Vilanch invokes his days at the Chicago Tribune with an editor’s detail-sharp eye. He nails newsroom lingo as well as the indolent lark of writers trying to sneak dirty words into the paper. Then it was on to Hollywood, where Vilanch discovered he was somehow “too hip” to get work. So he did what any sensible person would do: “I called Florence Henderson.”

There is some standard-issue stand-up material along the way — about the History Channel, Michael Jackson’s face and other space fillers. Vilanch’s eyewitness testimony is sharper, whether he’s retrieving a joke that didn’t get told at the Oscars or riffing on Ted Danson’s blackface stunt at the Friars Club.

Like all good comics, he reserves some of his ripest ridicule for himself. Musing on his “Celebrity Fit Club” gig, he notes that the “fall” from “Hollywood Squares” is “not that steep.” His team captain on that show of competing dieters is Chastity Bono, which occasions a double reflection from Vilanch.

“We look so alike it’s absolutely scary,” he says. And then, thinking of Bono and another contestant, Ricky Nelson’s son Gunnar, Vilanch has an “Oh God” moment: “I did drugs with your parents,” he wails to himself. “And now I’m losing weight with you.”