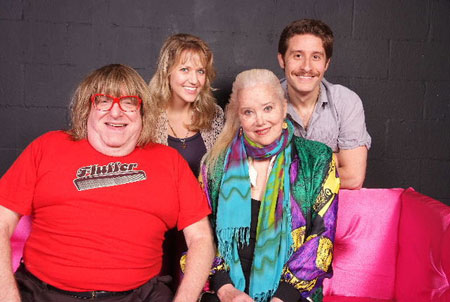 The guy who played squeaky-clean Peter Brady in The Brady Bunch was off in the corner talking to legendary adult film star Veronica Hart. At the other end, Oscar-nominated actress Sally Kirkland was sharing a laugh with funnyman Bruce Vilanch, who won Emmys for writing the Oscars.

It was an odd lot gathered this week at the Zephyr Theatre on Melrose Avenue in Hollywood.

“We’re here to make a little history, and without you all here, we couldn’t tell this important story,” said the ringleader David Bertolino. “Thank you for being brave enough to be a part of it.”

He is the man who spent years researching and interviewing people involved with the controversial film Deep Throat, and then wrote and produced a play about it off-Broadway in New York two years ago called The Deep Throat Sex Scandal. Now, Bertolino is bringing the play home to California.

“Maybe I did it a bit backwards, because the adult industry is based out here in California, but we just wanted to get it on the stage and see what people think,” Bertolino said.

“Who wants other people to tell us what we’re allowed to watch or not?” Vilanch said. “I’m thrilled to be a part of this. It’s an important story.”

The 58-year-old Bertolino recalled the controversy about the film when the Nixon administration was trying to prosecute the case, but he didn’t see the movie until much later when it was playing in a double-feature with The Devil and Miss Jones and he went to see it with an older woman. Now, the starlet of that movie, Georgina Spelvin is another one of the famous cameos who will performing in his play.

“Georgina is wonderful and still sexy and beautiful, and she said this would be her last public appearance,” Bertolino said.

Bertolino is mostly fascinated with the showmanship of Deep Throat promotions—a one-hour movie that cost $22,500 to make and brought in more than $600 million. Bertolino created Spooky World in New Hampshire after he bought a five-bedroom farmhouse and barn on five acres for $170,000. He got the PBS reality show This Old House to come to do free renovations and he collected horror movie memorabilia to show. It was an instant success, opening with more than 2,000 attendees on the first day.

Spooky World brought Bertolino out to the Hollywood Collector shows held regularly at the Beverly Garland Hotel in Studio City. That’s where he met Butch Patrick, who played Eddie Munster in The Munsters TV show and horror movie stars that he showcased at Spooky World, which he has since sold.

Now, he is looking for a permanent home in the Sherman Oaks, Valley Village or Studio City area because he likes the area so much. He enjoys the Ventura Boulevard restaurants, the Cardio Barre workout gym and other places in the area.

It was at a Las Vegas convention for lingerie where he met Ray Pistol who owns the rights to Deep Throat. Bertolino designed a nurse’s outfit and was asked to put Deep Throat star Linda Lovelace’s name on it.

“I found out about the movie,” Bertolino said. “I found out that no one went to see the movie when it first came out and then they paid people to stir up trouble and create publicity for them.”

And so, he has a giant blow-up giraffe outside the Deep Throat sign outside the theater. He also has plans to hire protestors to picket the play much like people picketed the movie. (See the videos above of Bertolino and the giraffe.)

Bertolino’s wife Linda wasn’t thrilled about his obsession with the project at first. “You have to realize that we were associated for so long with Spooky World that was a family place where Boy Scouts and Girl Scouts used to go to, so it took her a little while to get used to it,” said Bertolino, who also has a teenaged son. “But they get it now.”

After creating a thick script from news articles, court transcripts, interviews and Freedom of Information requests, Bertolino latched up with New York director Jerry Douglas. The most award-winning director and screenwriter in the gay adult industry, Douglas jumped at being involved with the project.

“I massaged the script a little and cut it down,” said Douglas, a gentle man with a baseball cap on all the time, and a cigarette when he can. “There was a lot of great research material that David came up with.”

Douglas said, “It is such an important story that is as timely now as ever. It is historic, it is poignant and it is very funny.”

There is nudity, both male and female, although no explicit sex acts, Bertolino said. “It is amazing how professional the actors are who came out to audition for the roles, and they have all really stepped up to be a part of this,” he added.

Savage, who plays the director of the movie, said, “I knew all the people in real life, and this story follows it all pretty accurately.”

The doors open to the public on Jan. 24 with tickets at $34. There is a special Guilty Pleasure ticket for $90 that offers a goody-bag of items from the Hustler store, a movie poster and a VIP reception with the stars after the show.

A special for Patch and Huffington Post readers allows a 50 percent discount on the Guilty Pleasure tickets by using the special code: LOVELACE when ordering.

For more information, go to http://deepthroattheplay.com