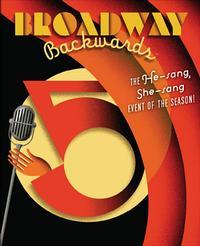 Broadway Cares/ Equity Fights AIDS (BC/EFA) and The Lesbian, Gay, Bisexual & Transgender Community Center (The Center) will present BROADWAY BACKWARDS 5, a one night only event, on Monday, February 22 at 8 PM at the Vivian Beaumont Theater at Lincoln Center. BROADWAY BACKWARDS 5 is produced by BC/EFA and will benefit BC/EFA and The Center.

Florence Henderson will serve as host for this year’s BROADWAY BACKWARDS.

Never underestimate the power of a pronoun! BROADWAY BACKWARDS will feature some of Broadway’s biggest names singing songs originally written for the opposite gender: women singing songs written for men and men singing song written for women. By keeping all of the lyrics intact, including the original pronouns, each song takes on an entirely new dimension, sometimes with hysterical results and sometimes with immensely touching results. BROADWAY BACKWARDS will give its audience a chance to see and hear some of the most treasured songs of the Great White Way in a whole new light.

BROADWAY BACKWARDS creator Robert Bartley is returning as director and choreographer of this special evening with musical direction by Wayne Barker.

BENEFACTOR ($25,000)
VIP Seating for 12 guests at the performance and 12 passes to the post-performance party
Full-page VIP ad in the event Playbill with priority placement
Priority “Benefactor” credit in event Playbill and event promotion on BC/EFA’s website
A matted and framed poster from the event autographed by stars of BROADWAY BACKWARDS 5
Playbill autographed by stars of BROADWAY BACKWARDS 5

PREMIUM VIP ($1,000)
1 extraordinary orchestra seat and 1 pass to the VIP post-performance party
Listing as “Premium VIP” in the event Playbill

VIP ($500)
1 Premium Orchestra Seat and 1 pass to the VIP post-performance party
Listing as “VIP” in the event Playbill.

Broadway Cares/Equity Fights AIDS is one of the nation’s leading industry-based, nonprofit AIDS fundraising and grant-making organizations. By drawing upon the talents, resources and generosity of the American theatre community, since 1988 BC/EFA has raised over $175 million for essential services for people with AIDS and other critical illnesses across the United States.

The Lesbian, Gay, Bisexual & Transgender Community Center provides innovative social service, youth programs and activities, educational and cultural/recreational programs for lesbian, gay, bisexual and transgender people of all ages. Since its inception, the Center has been the only LGBT-identified resource delivering a continuum of substance abuse prevention and treatment services to LGBT communities in and around NYC. More than 3,000 clients use Center Counseling, Advocacy, Recovery and Education (Center CARE) annually, which offers low-cost/no cost professional counseling and social services for substance abuse prevention and related HIV/AIDS, mental health and gender identity issues. More than 1,000 adolescents participate in our LGBT youth prevention program, the Youth Enrichment Services (YES) Program. In September 2007 the Center opened Center CARE Recovery, the first and only licensed outpatient substance abuse treatment program for LGBT communities in New York State.