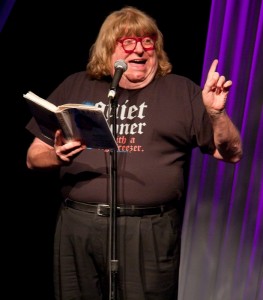 Even in a year-round arts community like South Floridaâ€™s, annual theater festivals that materialize, entertain, then vanish â€˜til the following year help make the summer season special. City Theatreâ€™s Summer Shorts festival, which begins this weekend in the Arsht Centerâ€™s Carnival Studio Theater, is the first of those special summer events.
Now in its 17th year, Summer Shorts has evolved from a two-program mini-marathon to a multi-faceted event. This yearâ€™s festival includes the program of short plays (nine are on the bill, which runs through June 17), an annual playwrightsâ€™ conference (set for June 15-17, featuring Christopher Durang and Leslie Ayvazian), a special theater event ( Standing on Ceremony: The Gay Marriage Plays June 21-24 at the Broward Center, starring Bryan Batt and Bruce Vilanch) and programming for kids (a production of the musical The Brand New Kid, which will play the Carnival June 9-17, the Kravis Center in West Palm Beach June 19-22 and Fort Lauderdale Childrenâ€™s Theatre June 29-30).

John Manzelli, City Theatreâ€™s producing artistic director, says the ongoing evolution of Summer Shorts has to do with location and economics.

â€œWeâ€™re always asking how to take what was a fun theater eventâ€¦and turn it into a show that belongs in [the Arsht],â€ he says. â€œIdeally, weâ€™d like a second program, but economically this was the only choice.â€

Still, this yearâ€™s lineup doesnâ€™t skimp on the quality of its plays or the acting and directing talent involved. Manzelli, Mark Swaner and Margaret M. Ledford are sharing directing chores. In the five-person acting company are Carbonell Award winners Irene Adjan, Elizabeth Dimon and Todd Allen Durkin, plus newcomer Katherine Wright and the man who has been in nearly every Summer Shorts festival, Stephen Trovillion.

â€œA smart producer gets the best people,â€ Manzelli says. â€œAnd Steve [Trovillion] is a staple of the company. Heâ€™s the best person Iâ€™ve ever seen in this format. He gets this like no one else.â€

Adjan, Dimon and Durkin have all participated in Naked Stageâ€™s annual 24-Hour Theatre Project, in which short plays get written overnight, rehearsed the next day and performed that evening. Summer Shorts, says Adjan, is different.

â€œAt Summer Shorts, you get time to delve into the plays and the characters, and actually make them full short plays,â€ she says. â€œAt 24-Hour, you go with your instincts.â€

Trovillion, who spends most of his year teaching at the University of Wisconsin-Stevens Point, has become a Summer Shorts fan favorite. The short-play format is the only acting he has done over the past decade, but he has his process down pat.

â€œYou have to work hard and fast, get to the essence of who the character is,â€ he says. â€œYou find differences physically and vocally. You make simple but big choices, and then you fill it in with whatâ€™s real. Finally, you get out of your head so youâ€™re actually talking to the other person.â€

â€œItâ€™s fun to put yourself out there in different plays. Itâ€™s like being in college and going from class to class. The audience sees you, then youâ€™re immediately different,â€ she says.

That variety, says director Swaner, is the spice of Summer Shorts.

â€œYou let each play and playwright have their own rhythm and style, and the audience sees all of that variety,â€ he says. â€œYet itâ€™s all performed by the same cast.â€

One thought on “Reminder: Bruce Vilanch To Star In “Standing on Ceremony: The Gay Marriage Plays” June 21-24 at the Broward Center”