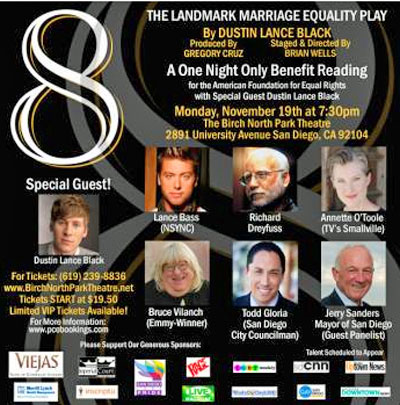 SAN DIEGO — A one-night only reading of Dustin Lance Black’s play “8” will be staged in San Diego on Monday, Nov. 19, at the Birch North Park Theatre, and include a number of high-profile cast members, including Black, Lance Bass, Bruce Vilanch, San Diego Mayor Jerry Sanders and City Councilmember Todd Gloria.

Production & Celebrity Entertainment, with license from the American Foundation for Equal Rights (AFER) and Broadway Impact, will present the reading of “8,” which is a play chronicling the historic trial in the federal constitutional challenge to California’s Proposition 8.

“8” shares an unprecedented account of the Federal District Court trial in Perry v. Schwarzenegger (now Perry v. Brown), the case filed by AFER to overturn Proposition 8, which stripped gay and lesbian Californians of the fundamental freedom to marry.

Black, who penned the Academy Award-winning feature film “Milk” and the film “J. Edgar,” based “8” on the actual words of the trial transcripts, first-hand observations of the courtroom drama and interviews with the plaintiffs and their families.

Immediately following the reading, there will be a short talk back session featuring marriage equality advocates including Black, Sanders and other special guests.

A limited amount of VIP tickets will be available for $75 each, and include preferred seating and access to a 6 pm “Meet and Greet” with the cast and special guests.

More information about “8” is HERE.