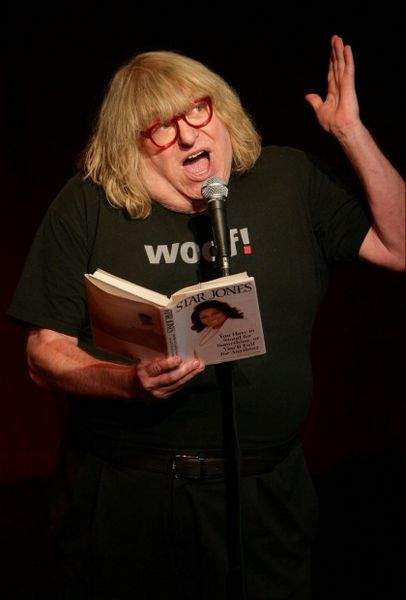 The last time I saw Bruce’s live show (Almost Famous) was in New York, at the Westbeth Theatre in the Village.
I went to two of his shows the weekend of May, 20th. 2000.

The shows at the Westbeth were more like a one man show than just doing stand-up comedy. It had some costume changes, piano accompaniment and Bruce even sang a couple songs.

So, when he wrote to tell me that he would be performing at the Improv in Houston for one and then the next night he would be in Dallas performing, I was not sure what to expect.

I’ve never been to a true comedy club and being he was appearing on a Wednesday night, I didn’t know what kind of crowd would be there and how many people would come see his show.

The show would started at 8:00 pm and we arrived at 7:00 pm. As always gay people want be early to anything that has to do with show business. They want the best seat they can get if it is not reserved and want to check out the place long before the show starts.

The waitress takes us to our table and I notice that only two other tables have couples at them. Well wouldn’t you know it both tables were older queens like us, so I thought it must be boys night out to see Bruce perform. For the next 45 minutes it was just the three tables, but then like a light went off, people were coming from everywhere and the place was filling up fast. It was a very good mix of people and I know that everyone enjoyed the show.

The Improv had two other comedians perform before Bruce came out. We could not wait to see Bruce. Since the last time I saw him he has lost 94lbs. and so I was anxious to see how he looked.

Well, it was time for his performance and when he came out in all his glory, HE LOOKED GREAT!

Bruce has worked with almost everyone over the years, some good like Cher, Bette, Whoopi , just to name a few and some bad like Abba and Pia Zadora, who’s husband paid big name performers to have her open their shows. That Pia was once in a production of “The Diary Of Anne Frank” and she played Anne and was so bad that at one point of the play the audience says, “SHE’S IN THE ATTIC”!

He told funny stories about writing for the Oscar’s, he has been a writer on the show for 20 years. Dealing with all the changes during the show and the backstage problems that needed to be fixed in seconds for the live broadcast.

Bruce said, that he has worked with Bette the longest, now 38 years and he named some of the places she had performed in Houston over the years. He told the story of how he introduced Bette to the Sophie Tucker jokes and how he felt that of anyone he has worked with, she was the one who could deliver the jokes the best. How he had seen Sophie Tucker perform a few times when he was young. Then he went on to tell some of those Sophie Tucker jokes.
His delivery was perfect.

Bruce had them laughing for his entire set! He was great. You must go see him if he comes to your area!

After the show he came out to speak to us and few other people that wanted to meet him.

Again, he looks great and said, that the latest movie he (Uncle Max) is in “Oy Vey, My Son Is Gay” would be opening in selected cities, November 6th.

Dave and I had a wonderful time!