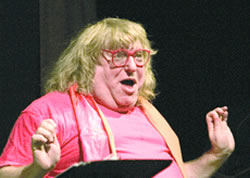 “Bah, humbug!” said New York’s gay community to the icy winds of winter as they gathered on the evening of December 20 at the Lesbian, Gay, Bisexual & Transgender Community Center for “A Queer Carol.”

This scripted reading of the Charles Dickens classic was given a “Queer Eye” makeover with the help of a talented cast featuring Flotilla DeBarge as the Ghost of Christmas Present, plus “Hollywood Squares” stalwart Bruce Vilanch, the master of ceremonies.

“In the words of Noel Coward, Christmas is at our throats again,” said Vilanch as he stood in front of a set artfully decorated by Richard Ellis with white poinsettias and billowing silks, a baby grand at stage left.

Coward might have been amused to see writer Joe Godfrey’s take on this Christmas classic, set in “the Chelsea bygone days” with Ebenezer “Ben” Scrooge, played in a nice turn a la Eric McCormack in “Will & Grace” by Malcolm Gets as the fussy owner of an interior decorating firm and Bob Crachit (Max von Essen) as his toothsome young assistant. Gay interior decorators might sometimes betray the bitterness of an unreformed Scrooge, they are hardly the stuff of fiction. In this telling, Tiny Tim is Cratchit’s HIV-positive partner, who suffers because of Scrooge’s belief that health insurance is a rip-off.

When do-gooder Fred, played by Ray DeMattis in a red tam-o’-shanter and scarf, comes by for donations, the charity du jour is Broadway Cares/Equity Fights AIDS. Scrooge declined to donate, but audience members were far more generous; several people I spoke with said they took the opportunity that evening to support the Center by becoming a member.

His poetic license notwithstanding, Godfrey’s script remained impressively close to the original text. Whole passages remained unchanged—a nice touchstone when contrasted with the modern subplot he allows, which features additions like that of Cynthia Pierce as Svetlana, Scrooge’s Russian housekeeper, by way of Brighton Beach. Pierce also doubles as half of a lesbian couple, with Jeanine Serralles, who make up Bob and Tim’s extended queer family in a welcome show of diversity.

As in the original, however, the best action comes when the spirits begin to appear. “A Queer Carol” has things kick off with director Richard Sabellico bringing in Jacob Marley, Scrooge’s partner “dead some 12 years now,” clad in leather chaps and shining silver chains. Sight gags like this meld seamlessly with running jokes like a bit about decorating Kitty Carlisle’s condo, keeping the story light and fresh.

When a Marilyn Monroe ringer steps up in hot pink to play the Ghost of Christmas Past, we also get a chance to see the young Matt Cavenaugh play the irresistibly cute Ben Scrooge as a fey, sweater-knitting gay boy, reminiscent of the fancy pants stylist from “School of Rock.”

Vilanch even threw his hat in as Fezziwig, the gay reveler who quips, “Have you been naughty or nice? Because it would have been awfully nice if you’d been naughty.” Predictably, Scrooge and Marley began their downward spiral when they bilk poor Fezziwig out of his bankrupt design firm. After the disco ’70s coke binges, the gentrifying ’80s and the advent of the AIDS epidemic, the damage is complete, and Scrooge is an unrepentant miser.

Flotilla De Barge keeps things swinging as the Ghost of Christmas Present, clad in a green sequined top with her silk poinsettia headgear bobbing and bouncing with every move. De Barge’s deadpan comic delivery suited this character as she read Scrooge for his life of humbuggery.

By the time the Ghost of Christmas Yet to Come makes a spectral appearance to portend Scrooge’s lonely end, he is scared straight, and wakes up to order a giant gift basket from Zabar’s for Crachit, give Svetlana a raise, and generally repent in his ways. Ben’s lost love, Jake, reappears as “Blake,” giving Scrooge a second chance for love at first sight.

Although the show was a staged reading, the entire production was infused with such positive energy the occasional flub proved innocuous. As the eleven o’clock number, “Joy to the World,” rang out, the crowd seemed absolutely ebullient.

During a time of year that can be stressful, even depressing, for gays and lesbians, “A Queer Carol” is deserving of the highest kudos for offering a hopeful and inspiring view of the healing power of friends, family and forgiveness.