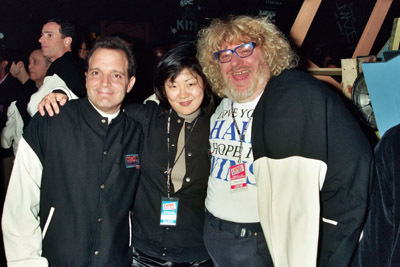 Days and nights of jungle fun during Carnival Week in Provincetown
Margaret Cho joins with Bruce Vilanch to act as grand marshal for Carnival parade on Thursday
By Melora B. North
Provincetown Banner

PROVINCETOWN â€”
If you wake up one morning this August and the weather is humid and sticky, and Commercial Street brimming with madness and fun, then you know itâ€™s time for Carnival â€” oh, yes, itâ€™s time for a parade, dancing, games, music and so much more.

â€œJungle Fantasyâ€ is the theme for this yearâ€™s Carnival Week, running Aug. 15 through 20. The grand marshals for the annual Carnival parade are Margaret Cho and Bruce Vilanch, who will also be performing at the Madeira Room at Vixen throughout the coming week.

Choâ€™s been in town before with her comedy show, and, in fact, she was even Chief of Parade in Sydney, Australia, when she led the Gay and Lesbian Mardi Gras Festival down Oxford Street back in 2008. So, it should be a no-brainer for her to team up with Vilanch to head the party on Thursday.

Best known for her explicit comedy routines, she takes on all the hot issues of the day, such as substance and alcohol abuse, from which she herself is recovered; eating disorders, another challenge she has faced; her bisexuality and obsession with gay men; and of course, politics, the ever so popular brain tease of heated debate, which in 2004 got her un-invited to speak at the Human Rights Campaign/National Stonewall Democrats benefit at the Democratic National Convention because the powers that be feared her strong voice would cause some unwanted excitement.

Hailing from San Francisco, Cho has worn many hats over the course of her career, which started when she was in high school and got involved in an improvisational comedy group. That led to her building her own routines, which launched her stand-up career practicing her trade in local clubs as well as performing an opening act for Jerry Seinfeld. The Seinfeld stint led to a spot on a Bob Hope special. Along the way she got involved in acting and appeared in the â€œGolden Girlsâ€ spin-off called â€œThe Golden Palace,â€ as well as an ABC sitcom based on her comedy routine, â€œAll American Girl,â€ featuring an East Asian family. Unfortunately, the show was cancelled but the outcome was a positive one, the publication of her first book, â€œIâ€™m the One That I Want.â€

She has several stand-up films to her name and had a clothing line which faltered. She has another book on the stands, â€œI Have Chosen to Stay and Fight,â€ and a reality show, â€œThe Cho Show.â€ Cho has worked on the Lifetime series â€œDrop Dead Divaâ€ and even writes songs and performs belly dances. She is married to artist Al Ridenour, with whom she says she shares a â€œconventional marriage.â€

A comedy writer and actor, wisecracking Vilanch became a household name when he appeared on the re-born â€œHollywood Squaresâ€ along with Whoopie Goldberg. He attended Ohio State University from which he graduated with a BFA in theater. He has appeared on television in â€œBosom Buddiesâ€ and â€œLaw & Orderâ€ and was in the film â€œThe Ice Pirates.â€ Vilanch writes joke material for awards shows and, back in the â€˜70s, wrote material for â€œThe Donny and Marie Show.â€

On the big stage he played Edna Turnblad in â€œHairsprayâ€ in 2005 on Broadway, and he has been the inspiration for two documentaries. Vilanch is gay and an admitted, eager carnivore. He takes the audience on a humorous gig behind the scenes of show biz at Vixen Aug. 21 and 22 at 7:30 p.m. Tickets are $25.

Some other highlights of Carnival include the Jungle Opening Party on Sunday at 9 p.m. at the Boatslip Resort, with guest appearances by Felicity Layne and music provided by DJ Maryalice.

Nature fans can enjoy a whale watch â€œSaltwater Safariâ€ on Monday when boarding starts at 9:30 a.m. at MacMillan Pier. Also at the pier from 3 to 8 p.m. is the Jungle Jam Pier Dance and Jungle Fantasy costume contest.

Tuesday morning kicks off the â€œRumble in the Jungleâ€ volleyball tournament held at Ryder Street Beach. From 5:30 to 9:00 p.m. that afternoon the party continues to rock at The Banana Boat at MacMillan Pier with beats provided by DJ Lee Thornhill.

Festivities on Wednesday include Drag Bingo at 6:30 p.m. at the UU Meeting House and, at 9 p.m., the â€œNight of Tarzanâ€™s Temptationâ€ at the Shipwreck Lounge.

On Thursday, starting at 3 p.m., parade fever will storm through town in all its jungle glory, and afterwards, at 10:30 p.m., the party will go on at Club Purgatory.

It will all end on Friday night with the Monkey Business Closing Party at 9 p.m. at the Crown & Anchor.

Every day from 12 p.m. on, beads, T-shirts and event tickets are available for sale at Carnival Headquarters at 258 Commercial St.

For more information, tickets and entry fees, call the Provincetown Business Guild at (508) 487-2313, or visit www.ptown.org to find out about other events such as the Jane Loves Jane Dance Party on Wednesday at the Pied Bar, the Drag Brunch on Friday at Patio, the Inn Stroll through town, the Jungle Beat Dance Party at the Atlantic House, and Kate Clinton at the Crown & Anchor, to name just a few more events.