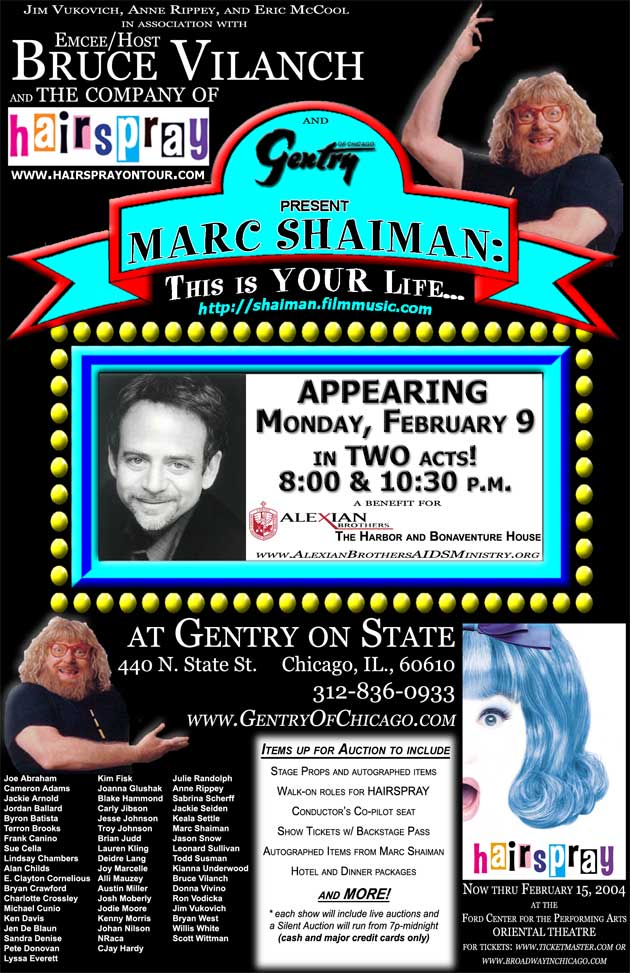 Jim Vukovich, Anne Rippey and Eric McCool in association with emcee/host Bruce Vilanch, the company of Hairspray and Gentry of Chicago present Marc Shaiman…THIS is your life! The benefit will be done in two (2) acts (shows) and will feature Shaiman’s music from stage and film.

Marc Shaiman, five-time Oscar-nominee and winner of Tony, Grammy and Emmy awards, will be at the piano playing for the company of Hairspray as they celebrate his vast collection of Broadway and film scores. Marc’s partner/collaborator Scott Wittman, himself a winner of both Grammy and Tony awards and a prolific director, will participate as well. Their special Cabaret Shows to benefit The Harbor and Bonaventure House will take place Monday, February 9, 2004 in the cabaret room of Gentry on State Street. Act One begins at 8:00pm with Act Two at 10:30pm. Each act will include live auctions with a silent auction held in the lobby of the club from 7:00pm until 1:00am.

Musical Director/Conductor Jim Vukovich offered to organize the benefit in association with his sister-in-law, Dawn Nahf, the Executive Director of Alexian Brothers’ THE HARBOR (www.alexianborthersaidsministry.org). Gentry of Chicago is proud to host the event in continuance with their “Broadway Backstage” charitable event series – part of Gentry’s Golden Note Series.

Gentry’s most recent “Broadway Backstage” event was with the 2003 National Touring company of Rodger’s & Hammerstein’s Cinderella with Eartha Kitt, Deborah Gibson and Paolo Montalban raising $7,212 for BC/EFA and Season of Concern.

Auctions held during the night and will include autographed items from Mark Shaiman as well as from the cast and tour, theatre tickets, walk-on roles, conductor co-pilot seats, private party performance by Jen Porter & Desirée Irwin and more! In addition, an oversized Hairspray tour poster will be autographed by the company and auctioned as well.

Hairspray, winner of eight 2003 Tony Awards including Best Musical, continues playing in Chicago at The Ford Center for the Performing Arts Oriental Theatre through February 15. See ticketmaster.com or call 312.902.1400 for tickets.

Gentry of Chicago is located at 440 N. State Street. The event is “No Cover, Two-drink minimum and Over 21 only.” For more information about the event or the club, contact Eric McCool at (312) 836-0933 or email: GentryChicago@aol.com.

Marc Shaiman has been nominated for The Academy Award five times (Sleepless In Seattle, The American President, The First Wives Club, Patch Adams, and South Park: Bigger, Longer & Uncut). He has lost each and every time! In 2002, Marc was honored with the “Hollywood Outstanding Achievement in Music-In-Film” award at the 69th annual Hollywood Film Festival.

Marc has composed and/or adapted music, and/or arranged music and/or served as music supervisor or written lyrics for over 40 films, including. He was thrilled to recently collaborate with Eric Clapton on the score for Rob Reiner’s The Story of Us.

He started his career as Vocal Arranger for Bette Midler, eventually becoming her Musical Director and Co-Producer. His instincts, his ear and the fact that he is still a Bette Midler fanatic have enabled him to find and bring her the Grammy winning songs “Wind Beneath My Wings” and “From A Distance” and he has written countless parody lyrics for endless benefits for Bette (“Everything’s Comin’ Up Grosses“). But it is their collaboration on her Emmy Award winning performance for the final Tonight Show with Johnny Carson which will always remain the highlight.

He has been nominated two times for the Emmy Award, and is an actual Emmy Award winner for co-writing Billy Crystal’s ‘Oscar Openings’. His Television credits include: The Academy Awards (Emmy Award-“Writing for a Variety or Music Program”), Saturday Night Live (Emmy nominee-“Writing for a Variety or Music Program”), HBO’s From The Earth To The Moon, and Lifetime’s Jackie’s Back. He has also appeared as a guest on: The Rosie O’Donnell Show, The Tonight Show with Jay Leno, Late Night with Conan O’Brien and The Martin Short Show.

Marc has written music (and often co-written the lyrics) for the following Off Broadway musicals: Livin’ Dolls, Demetos, Trilogy Of Terror, The G-String Murders. Regarding his work on these shows, The New York Times wrote: “Mr. Shaiman’s eclecticism and gift for parody aren’t a ruse disguising an underlying lack of talent….A versatile craftsman descended from the early 60’s Brill Building school of songwriting, Mr. Shaiman writes tunes that are not simply catchy; the best are outright showstoppers…”

His arrangements and/or compositions have appeared in the following Broadway and Off-Broadway shows: Peter Allen – Up In One, Leader Of The Pack, The Tap Dance Kid, Andre DeShields’ Harlem Nocture, Legends with Mary Martin and Carol Channing, Harry Connick Jr. on Broadway, Patti LuPone at Carnegie Hall.

He is most proud to have musical directed Commitment To Life VII which featured Tom Cruise, Tom Hanks, Whitney Houston, Angela Lansbury, Liza Minnelli, Barbra Streisand, Bruce Springsteen and Elizabeth Taylor and which raised over $5 million for AIDS Project L.A.

Mr. Shaiman has appeared in many of the films he has worked on, including his scene stealing moments in: South Park, Beaches, Hot Shots and James L. Brooks’ Broadcast News.

He resides in both Los Angeles and New York City with theater director and collaborator Scott Wittman, with whom he co-wrote the smash Broadway musical, Hairspray, based on John Waters’ film.