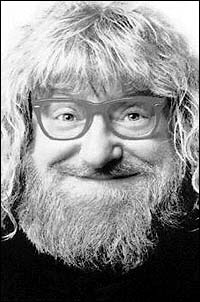 Got Bruce!
Vilanch Will Be Broadway’s New Edna in Hairspray in October
By Kenneth Jones
July 14, 2004

Bruce Vilanch, the zaftig writer-celebrity who plays Edna Turnblad in the national tour of Hairspray, will take his act to the Broadway company starting Oct. 5, a spokesman for the show said.The casting was expected. Vilanch (who launched the tour in fall 2003) will take over for Michael McKean, the current Edna who began his Broadway run May 4. Harvey Fierstein won the Best Actor Tony Award for his hausfrau turn.

Carly Jibson plays Tracy Turnblad on Broadway. The teen age actress originated the part in the national tour (with Vilanch as her mama).

First seen in the John Waters movie, “Hairspray,” Tracy is the feisty Baltimore teen who changes the face of local TV forever when she promotes integration on a dance show in the 1960s. She also falls in love with the coolest guy in school and gets her mother a fantastic makeover.

Taking over as Edna on tour Sept. 7 will be girthy comedian John Pinette. Vilanch gets a month off before making his Broadway musical comedy debut in early October.

Vilanch, a bigger-than-life personality as a writer and comic, has served as a writer for the Oscars, Emmys, Tonys and Grammys. He is author of the book, “Bruce! My Adventures in the Skin Trade and Other Essays,” and was the subject of a documentary film, “Get Bruce!”

He has performed a one man show, billed as a “bio comedy,” in engagements around the country.

Michael McKean is known for comic turns in “This Is Spinal Tap,” “A Mighty Wind” and “Laverne and Shirley.”

Hairspray is directed by Jack O’Brien, with book by Mark O’Donnell and Thomas Meehan and a score by Marc Shaiman (music and lyrics) and Scott Wittman (lyrics). Jerry Mitchell choreographed.