PLATINUM To Debut at FRINGE NYC, Tix On Sale 7/23
Back to the Article
by BWW News Desk 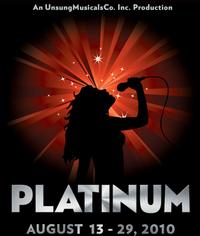 An electrifying story of ambition and survival, Platinum follows Lila Halliday (Larsen), a dazzling Hollywood legend trying to make a comeback in the explosive music industry of the 1970s. Determined to reignite her career, she turns to rock star Dan Riley and finds herself falling for him as they both fight to stay in the game.

This new one-act version of Platinum will be performed by a cast of five and feature two new songs (“This One’s for Me”, “Moments”), with four other musical numbers and eight characters having been eliminated. The production is choreographed by Rommy Sandhu (How Now, Dow Jones, Mary Poppins) with musical arrangements by Mr. Friedman (“The Electric Company”) and musical direction by Fran Minarik (Sessions, The J.A.P. Show).

Said director Ben West: “Platinum is an extraordinary project on which I began working four years ago. In addition to focusing the story, we have redefined the musical language of the show by eliminating four songs and adding two new numbers, one which was cut prior to and another which was written after the original run. The time has also shifted to 1976, the year in which the Recording Industry began issuing platinum certifications. With its unique concept and its exhilarating original material, I am thrilled to be further developing this project as part of the New York International Fringe Festival and look forward to returning Platinum to the stage.”

The original Broadway production of Platinum opened at the Mark Hellinger Theatre on November 12, 1978 starring Alexis Smith under the direction of Joe Layton. The production played 33 performances and received two Tony Award nominations for Smith and co-star Richard Cox. It has not been seen since. An earlier version titled Sunset was directed and choreographed by Tommy Tune at the Studio Arena Theatre in 1977. The authors, Holt and Friedman, revisited their original Sunset in 1983 at the Village Gate. The cabaret production starred Tammy Grimes.

SARAH LITZSINGER is Broadway’s longest running Belle in Disney’s Beauty and the Beast. Other Broadway credits include Marilyn: An American Fable, Oliver!, Les Miserables and Amour. Sarah also played Eva Peron in the 25th anniversary tour of Evita and starred as the Narrator opposite Donny Osmond in Joseph…. Some of her other favorite roles are: Cathy in The Last 5 Years, Susan in Tick, Tick…Boom! and Cordelia in Falsettos (George Street Playhouse). Sarah is also the recipient of the 2007 Breakout Award at the HBO Aspen comedy Festival (for her comedy act she wrote and starred in with partner, Kate Reinders). She also performed this act at the TBS Comedy Festival at Caesar’s Palace in Las Vegas in 2008.

BRUCE VILANCH has written for the Oscars, the Emmys, the Tonys and the Grammys, winning six Emmy Awards in the process. He has starred on Broadway in Hairspray and has graced the cover of his book, Bruce! My Adventures in the Skin Trade and Other Essays, and his documentary, Get Bruce! He is also appeared on “Hollywood Squares” for four seasons and in his one-man show as well as “It Nearly Wasn’t Christmas”, “The Morning After”, “Bosom Buddies”, “The Ice Pirates” and “Call Me Claus”. He devotes endless hours working with such charitable organizations as the Anti-Defamation League, National Foundation for Jewish Culture and numerous AIDS organizations.

GARY WILLIAM FRIEDMAN is the composer of the Tony nominated, Obie Award winning musical The Me Nobody Knows. Other musical theater credits include the Outer Critics’ Circle Award winning musical Taking My Turn (presented on PBS Television’s Great Performances Series). Friedman’s symphonic works have been commissioned and performed by orchestras and festivals nationwide. Colloquy, a debut CD of his classical works, was released last fall. Friedman’s music also spans the genres of film scoring and television, where he served as Music Director for T.V.’s “The Electric Company”, writing many songs including the popular “Spider Man Theme Song”. He has written the arrangements for, and co-produced several critically-acclaimed jazz recordings by vocalist Stevie Holland.

FRAN MINARIK has appeared on-stage accompanying Jackie Hoffman in The J.A.P. Show. His music has recently been heard in the documentaries The Making of “The Boys in the Band” and When Ocean Meets Sky and in the short film The Rub. His recent Musical Direction/Conducting credits include the Broadway production of In My Life (Associate Conductor), How Now, Dow Jones, Sessions, My Way and Smokey Joe’s Cafe at the Lyric Theatre and 1776 at Ford’s Theatre. He orchestrated the opening for Broadway Bares XII: A Comic Strip and appeared with Susan Lucci on “All My Children”.

UNSUNGMUSICALSCO. INC. (Ben West, Artistic Director) is a not-for-profit production company dedicated to the preservation of musical theatre through the presentation of infrequently performed works. Focusing primarily on overlooked projects from the Golden Age, both hits and substantive misses, UMC treats each property as a new musical thereby providing a unique collaboration between the artists of today and those of the past. Current projects include new productions of Platinum, Lend an Ear and the critically acclaimed How Now, Dow Jones, the new version of which is available for licensing through Samuel French, Inc.